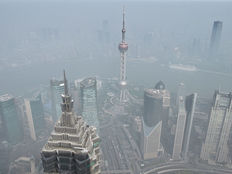 China is nearing the launch of its own carbon market, which will become the world’s largest and double the current global emissions covered under cap-and-trade programs worldwide. The market will launch Friday, according to the Wall Street Journal.

China is currently the largest emitter of carbon globally. In creating the carbon market, it is setting its sights on reaching peak emissions by 2030, as well as becoming carbon-neutral by 2060, reported officials at a news conference on Wednesday.

At launch, the program will include 2,225 companies within the power sector, which collectively produce a seventh of all global carbon emissions derived from fossil fuels, a number calculated by the International Energy Agency.

The new trading program will limit the amount of carbon that factories and power plants are allowed to emit per year, which they can in turn buy or sell the allowances. This puts pressure on companies to regulate their emissions so as to operate more cost-effectively, thereby reducing carbon emissions.

The Chinese program is built differently than other global cap-and-trade carbon systems. Instead of having a hard cap on emissions, companies in China will have allowances that are based on previous years’ performance, with benchmarks set accordingly. These allowances will be able to be traded by auction or negotiation, among other ways, creating a system that has more leeway than those existing today.

Within the next three to five years, the program will expand beyond just the power sector to also include petrochemicals, chemicals, building materials, iron and steel, nonferrous metals, paper, as well as domestic aviation. All are industries that have high net carbon emissions. Officials have said that they plan on adding the cement, aluminum, and steel sectors sometime next year.

The initial price the allowance will trade at is still unclear, (an allowance being equal to the value of one metric ton of carbon emissions). Yet based on pilot projects in recent years, the price is estimated to be the equivalent of anywhere from $6.18 to $7.73 said Zhao Yingmin, China’s deputy environment minister.

This would align it most closely to existing cap-and-trade systems in the U.S.

China’s Ministry of Ecology and Environment will be the trading platform’s regulator and supervisor, and companies will be expected to submit their emissions data to the ministry or else face fines or reduced future allowances.

The plan has been in the works since 2011, but the outbreak of the Covid-19 pandemic pushed back the soft launch originally planned in 2020. Experts are anticipating a slow start. The first year will primarily revolve around ensuring the market functions.

“Once it’s all in place, it’ll be one of China’s best mechanisms to incentivize economically sustainable carbon reductions over the long term,” economics consulting firm Trivium China said in a note to clients this week.

Worldwide carbon allowances averaged around $24 per ton of carbon dioxide at the end of 2020. Regulators estimate that the number needs to be around $100 per ton in order to enact lasting change. KRBN is primed to capitalize on this growth, which encourages reduced emissions as the price climbs higher.

KRBN currently covers the European and North American cap-and-trade programs. China’s entrance, however, may prove to be the rising tide that lifts all boats.