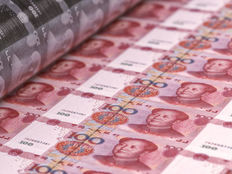 The first quarter of 2022 saw GDP growth in China higher than was expected, coming in at a 4.8% increase compared to an expected 4.4%, but recent COVID-19 lockdowns have begun to dampen performance already, reported the Financial Times.

As consumer spending slows — retail sales were down 3.5% overall in March year-over-year — the People’s Bank of China announced on Friday that it was reducing its reserve requirement ratio for banks by 0.25% as it attempts to pump liquidity into the economy. It could provide some much-needed relief while Shanghai, the country’s financial center, continues to be under COVID-19 lockdowns, and China confirms the first three pandemic-related deaths since the onset of the virus in 2020.

“The market expected a 50bps RRR cut though the PBOC’s statement made it clear they will cut incrementally versus pulling the band-aid,” explains KraneShares on their China Last Night blog.

China has reduced its growth targets for the year, but as it is an election year, it is expected that public policy will be highly supportive in helping to achieve those growth goals. Officials have also been increasingly speaking to minimizing pandemic impacts centered around shutdowns as the economic repercussions mount.

“Vice Premier Liu He led another meeting on allowing port and logistics activity to take place despite the Shanghai restrictions,” writes Kraneshares, a previously unheard of policy for the Chinese government in its zero-tolerance approach to COVID-19.

Retail sales may be down overall, but online retail sales in March were up 2.9% year-over-year and had grown 8.8% for the first quarter of 2022. Industrial performance was also up, gaining 5% in March compared to an expectation of 4% growth, as was fixed asset investment within China, growing 9.3% in Q1.

KraneShares offers two different funds with more targeted exposure to the growth of online retail in China; the popular KraneShares CSI China Internet ETF (KWEB B) offers exposure to some of the biggest companies within China’s internet sector, and the KraneShares Emerging Markets Consumer Technology ETF (KEMQ B-) which focuses on internet retail and e-commerce growth in 26 emerging market countries, including China.