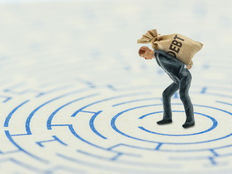 Evergrande, China’s foremost real estate developer, continues to cobble together interest payments on debts as the company teeters on the edge of defaulting on $300 billion in liabilities. In the midst of the economic fallout it is causing, smaller developers facing their own default have purportedly met with Chinese regulators to propose a debt restructuring or extending of offshore bond maturities, reported Reuters.

The Chinese government has signaled a potential unwillingness to bail the indebted company out, instead telling billionaire Evergrande founder Hui Ka Yan to use his own personal wealth, which has greatly diminished in the last year, to pay company debts, reported Bloomberg. Chinese authorities are ensuring that the company’s cash is only being put towards completing housing projects that have been put on hold instead of to creditors.

The meeting happened on Tuesday and was between Chinese developers, China’s National Development and Reform Commission (NDRC), and the State Administration for Foreign Exchange (SAFE), according to two sources speaking to Reuters.

Regulators have indicated that developers with large offshore debt maturities need to analyze their repayment risks and report back on any difficulties they might have in making those payments. They also indicated that companies should be ready to pay back principal and interest on their foreign bonds.

This is a signal to investors and markets that the regulatory bodies were working to manage the risk, believes Steven Leung, director of brokerage UOB Kay Hian in Hong Kong.

“When NDRC is involved, there may be even a chance that the primary bond market can be active again, giving opportunities to better quality developers to refinance,” Leung said. The additional extension of maturities requested by developers could allow for an increase in liquidity in the Chinese property sector, which a quarter of China’s GDP is derived from, but this is a move that would take time and negotiation, and isn’t without its own challenges.

The KraneShares Asia Pacific High Yield Bond ETF (KHYB C+) invests in USD-denominated high-yield debt securities from companies in Asia, excluding Japan. The fund is poised to capture the recovery and growth of the Asian bond market with the possibility of restructure in the future as Chinese agencies begin to manage the risk within the markets.

Nikko Asset Management, a partner of ARK Investment and one of the largest asset managers in Asia, recently became the active manager of KHYB. One of its first moves as sub-advisor was to divest the fund of its position in Evergrande.

KHYB is benchmarked to the JP Morgan Asia Credit Index (JACI) Non-Investment Grade Corporate Index and invests in high-yield fixed income securities, or “junk bonds,” that are rated below the four highest categories (Ba1/BB+ or lower) by at least one credit rating agency, or, if unrated, are determined by the sub-advisor to be of similar quality.

Nikko, the sub-advisor, uses top-down macro research and bottom-up credit research to create the portfolio, as well as a proprietary process that is a combination of qualitative and quantitative factors used to value an issuer’s credit profile.

By moving the credit curve up, KHYB will be more defensive against the benchmark and have shorter duration bonds compared to the index. “This helps with minimizing the volatility,” Leong explained. When the bonds mature, Nikko can decide how and when it wants to redeploy and invest in new bonds, depending on market conditions.