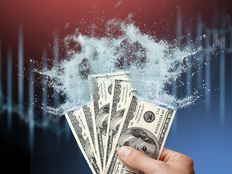 The Federal Reserve minutes were released earlier this week, and they indicated that the central bank is ready to deliberately slow the economy through interest rate increases in order to tame inflation, reported the Wall Street Journal.

While the Commerce Department reported that personal consumption expenditures (PCE) increased by 6.3% year-over-year for the month of April, finally decelerating slightly but still near their 40-year high. The measurement of the PCE is the Fed’s preferred way of gauging inflation.

Spending for consumers increased by an adjusted 0.9% in April; at the same time, the savings rate declined to 4.4%, a drop from March’s revised 5%.

“We have finally reached the point where households are dipping into their $4 trillion of excess savings,” Stephen Stanley, chief economist at Amherst Pierpont, told the WSJ.

Meanwhile, disposable income was flat for the month when inflation-adjusted, a reflection of the inability of wage increases to keep pace with inflation. Spending grew on automobiles, and parts within goods and utilities, food services, and accommodations were the greatest gains in services spending.

“This is not a time for tremendously nuanced readings of inflation,” Federal Chair Jerome Powell said in an interview with the WSJ last week. “We need to see inflation coming down in a convincing way. Until we do, we’ll keep going.”

Investing for Stagflation With IVOL

As stagflation concerns grow for advisors and investors, in which inflation remains high while economic growth slows, many are looking to position their portfolios accordingly. The Quadratic Interest Rate Volatility and Inflation Hedge ETF (IVOL) from KFAFunds, a KraneShares company, is designed to have a twofold hedge against an increase in fixed income volatility and/or an increase in inflation.

IVOL carries an expense ratio of 1.05% and has $1.6 billion in assets under management.