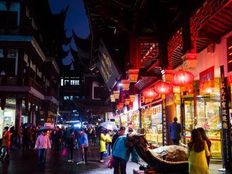 Investors may want to hold China tech ETFs given the underlying numbers, despite the serious hit to China stocks on Monday following Chinese President Xi Jinping’s consolidation of power at this weekend’s Communist Party Congress.

The summit, held every five years, not only saw Xi take on an unprecedented third term but also failed to nominate a successor and, perhaps most concerningly, allow the public removal of his predecessor Hu Jintao from the gathering.

BABA, TECHY, and BIDU, among others, dropped by 14.7%, 14.8%, and 15.08%, respectively, but U.S. firms that derive notable revenues from China, including Intel Corporation (INTC) and firms with large China sales exposure like Texas Instruments (TXN) have not reacted the same to the political news, with both up today by 1.1% and 0.7% respectively.

While China’s National Bureau of Statistics had delayed its economic indicators data drop last week, a move seen by some as avoiding overshadowing the party congress, the numbers eventually released showed the country’s economy grew 3.9% in the third quarter from a year ago – unspectacular but durable growth that beat analyst expectations as polled by Reuters.

Given the split between political uncertainty and the numbers on the ground, investors may still want to retain exposure to key Chinese companies that serve a nation of people whose buying power continues to grow, with KWEB a point of access to those firms.

“The Chinese economy has been stronger than most others in 2022 and is likely to see further growth in 2023, which should help locally based consumer discretionary and communications services found in KWEB,” said VettaFi head of ETF research Todd Rosenbluth.

KWEB tracks the CSI Overseas China Internet index and charges a 69 basis point fee, holding a 9.56% weight towards BABA, a 9.12% weight towards TECHY, and a 3.7% weight for BIDU. With global equities impacted by inflation and serious geopolitical risks so far this year, China remains a key market to consider, with KWEB a notable strategy among China tech ETFs.