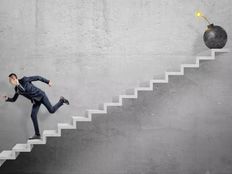 Didi is preparing to delist from the New York Stock Exchange as the embroiled Chinese ride-hailing company continues to suffer revenue loss. The company reported that its Q4 revenue was down 12.7% as it continues to be under a cybersecurity investigation within China, reports the Wall Street Journal.

As increasingly more board members resign — most recently Martin Lau, president and executive director of Tencent Holdings — the company has announced a shareholder meeting for May 23 to vote on delisting from the U.S.

Didi had a blockbuster IPO in June of 2021 at $4.4 billion, but shortly afterwards, Chinese regulators ordered that its apps be removed from stores as they launched an investigation into Didi’s data infrastructure. Its shares are currently down more than 80% from its IPO price, and the company reported an annual net loss in 2021 of $7.7 billion.

The delisting is unrelated to the Holding Foreign Companies Accountable Act that has seen increasingly more Chinese companies listed in the U.S. fail to meet compliance. There appears to be some traction being made between regulators on both the China and U.S. side, but it remains to be seen if an agreement can be reached that would prevent delisting of Chinese companies in 2024.

The Value of Local Knowledge

The KraneShares CSI China Internet ETF (KWEB B) offers exposure to some of the biggest companies within China’s internet sector, but because of the requirements of the chosen index provider, CSI, the fund never invested in Didi. Brendan Ahern, CIO of KraneShares, explained why in a communication to ETF Trends.

“KWEB’s index provider CSI did not include Didi in its indices due to the announced regulatory investigation shortly after the company’s IPO. CSI’s parent index methodology, the broad guidelines for their indices, includes a provision not including a company’s stock to their indices for the first time under that circumstance,” Ahern said.

KWEB tracks the CSI Overseas China Internet Index and measures the performance of publicly traded companies outside of mainland China that operate within China’s internet and internet-related sectors. CSI, the China Securities Index Company, is one of the leading index providers within China, and by utilizing an index provider with knowledge of the markets and securities, KraneShares was able to avoid being caught up in Didi’s challenges.

“By leveraging a local index provider familiar with local rules and regulations allowed us to avoid the unfortunate situation,” Ahern explained.