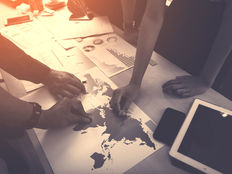 The economic impacts of Shanghai’s lockdowns were apparent in the latest economic reports from China, with factory output and retail sales down while the headline jobless rate hit 6.1%, a two-year high, reports the Wall Street Journal.

The strong stance that China has taken concerning COVID-19 infections and spread has meant that its financial center has been under lockdown for well over a month and businesses broadly are feeling the impact. Industrial production was down 2.9% in April, while retail sales were down 11.1%, but there have been bright spots of performance despite the economic downturn.

“China’s April economic release was an expected dud due to Shanghai’s lockdown. Retail sales were driven lower by a -22.7% fall in restaurant sales though online retail sales have rebounded year-to-date as of the end of April,” KraneShares wrote in the China Last Night blog.

Also seeing an increase was the production of new electric vehicles, which experienced a growth of 40% year-over-year, with companies such as Xpeng and Nio trading higher in Hong Kong on Monday.

Economic output could snap back once lockdowns are lifted, and the impacts of any action the central bank and government take in working to lift the economy through stimulus and support could further boost the economic outlook and performance, which had previously been experiencing a cycle of monetary easing.

“We’ve reached a point where we should use policies to save the economy at all costs,” said Huang Yiping, an economics professor at Peking University and former advisor for the Chinese central bank, in an official transcript.

For investors who are looking for opportunities to diversify their portfolios through investment in emerging markets but either already have a separate, targeted China allocation or are looking to sidestep exposure to China, the KraneShares MSCI Emerging Markets ex-China Index ETF (KEMX C+) can be a good solution.

Investing in KEMX allows for the fund to be slotted into a portfolio alongside targeted investment into China that could be thematic, tactical, or a variety of other approaches.

To determine a security’s country, where it is incorporated and where it is listed are considered first. For a security that has a primary listing outside of the country it is incorporated in, any secondary listings, the geographic location of shareholders and operations, location of headquarters, its history, and which country investors associate with the issuer are all considered.