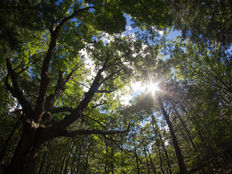 Michigan to Protect its Forests for Carbon Offsets

Michigan’s Department of Natural Resources recently announced it would be limiting logging in the state’s Lower Peninsula in order to utilize the forest for carbon offsets. The Pigeon River Country State Forest typically brings in money from oil and gas leases, timber sales, hunting licenses, and camping fees, but will now be working to conserve the red pine, aspen, and elk trees growing there for a different kind of revenue.

Carbon offsets are a type of currency that are used in the push to rein in harmful emissions globally. Heavy emission emitting companies are capped in the level of emissions they are allowed within cap-and-trade markets such as the U.S., Europe, and most recently China. Companies must use programs like Michigan’s to offset emissions beyond their cap.

Increasingly, companies are paying various entities to leave their trees instead of harvesting them for timber. Each tree is measured by foresters or satellites and the amount of carbon it can pull from the air is calculated, and then the offset is sold.

DTE Energy, the largest energy company in Michigan, has already entered into an agreement to purchase the offsets, which it will use to create offerings for customers that use natural gas, enticing them with smaller carbon footprint options. The agreement is the first of its kind that involves utilizing state land.

“When we polled other states around the nation, there are about 25 of them that are looking into similar programs,” said Scott Whitcomb, senior adviser for wildlife and public lands at Michigan’s Department of Natural Resources and former manager of Pigeon River Country. “We can expect others to probably follow in our footsteps.”