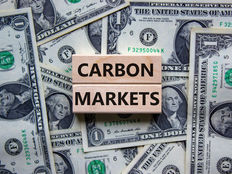 The Article 6 rules that create the foundation for a global market for trading carbon credits come after six years of work and attempts to get a framework off the ground, reports Financial Times. The framework will contain two different market types: one that is available to both the public and private sectors, and then a separate bilateral one that enables credit trading between countries.

The creation and passage of the global carbon market is anticipated to drive even greater demand for carbon credit producers as well as those operating within allowances markets. Trading of carbon offsets could potentially surpass $1 billion by December, and allowances markets are capitalizing on the increasing demand.

With the announcement, existing carbon markets responded favorably, with European Union Allowances hitting new highs of $74 per ton of carbon emissions and California Carbon Allowances passing $33 a ton. Luke Oliver, managing director and head of strategy for KraneShares, explained in a communication to ETF Trends that although Article 6 does not directly impact existing markets, “the sentiment is bullish for carbon schemes.”

Pricing pressures persist in the European market with record high natural gas prices continuing to climb and no relief in sight as winter looms. The forced reliance on coal and other high emissions-producing forms of energy mean that more carbon credits will be needed in the immediate future, with allowance markets benefiting from upwards price movements driven by the demand.

The fund’s benchmark is the IHS Markit Carbon EUA Index, an index that tracks the most-traded EUA futures contracts, a market that is the oldest and most liquid for carbon allowances. The market currently offers coverage for roughly 40% of all emissions from the EU, including 27 member states as well as Norway, Iceland, and Liechtenstein. The annual cap reduction was recently increased from 2.2% to 4.2% in an attempt to meet long-term carbon emission targets.

The fund’s benchmark is the IHS Markit Carbon CCA Index, an index tracks the most-traded CCA futures contracts, a market that encompasses roughly 80% of California’s greenhouse gas emissions and has also covered Quebec’s emissions since it expanded in 2014. The cap is currently set to decrease by 4% every year to meet future targeted carbon emissions levels, and it has a built-in floor price that raises 5% plus an inflation adjustment every year.