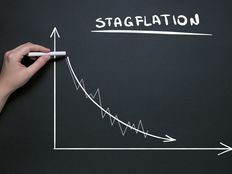 Stagflation Is on the Docket and How to Invest For It

The Federal Reserve is set to hold its much anticipated May meeting, beginning tomorrow and lasting for two days, where a 0.50% interest rate increase is expected to be announced. The central bank is hoping to tackle persisting, high inflation by slowing the economy through rate hikes. With much of the inflationary pressures outside of the purview of the bank’s control, the result could very well end in stagflation, in which growth slows while inflation persists.

March 2022 saw inflation reaching 8.5%, the fastest monthly change that’s happened since 1981, reports CNBC. The last time the U.S. experienced stagflation was in the 1970s. Inflation continued to climb, often into double digits, culminating in a response from the Fed that resulted in tightening aggressively, with interest rates reaching around 18%.

The aggressive response and strong monetary policies resulted in many U.S. companies moving business overseas to cheaper labor sources. The impact on the labor force within the U.S. was huge, causing stagnating income. The combination of this stalling growth domestically, alongside continued soaring inflation led to a period of stagflation which the central bank is hoping to avoid this time around.

Now, with the Fed having begun its tightening cycle through interest rate increases, while also looking to begin shedding some of its bond holdings in efforts to reduce the balance sheets, investors and analysts are bracing for what comes next.

“For investors I think this is going to be a bit of a shock, and that’s an understatement,” says Diane Swonk, chief economist at Grant Thornton. “Investors don’t have any muscle memory of what it’s really like for the Fed to actually fight inflation versus preempting or just adjusting rates to be in sync with a stronger economy.”

In the 1970s, OPEC increased oil prices by over 300%, adding huge inflationary pressures through soaring gas prices. Fast forward to today and the war in Ukraine is causing much of the western world to pivot away from Russian oil and gas, creating expectations of prolonged, increased energy prices. Russia is a partner of OPEC.

“This is a difficult period of time for sure; inflation is higher today than it has been for 40 years, but I think there’s some reasons for optimism,” says David Wilcox, a senior fellow at the Peterson Institute and director of U.S. economic research at Bloomberg Economics. These reasons include credibility that the Fed currently has which it didn’t the last time it battled serious inflation, according to Wilcox, because “to a degree, inflation is a self-fulfilling prophecy.”

How to Invest for Stagflation with IVOL

The Quadratic Interest Rate Volatility and Inflation Hedge ETF (IVOL ) from KFAFunds, a KraneShares company, is designed to have a twofold hedge against an increase in fixed income volatility and/or an increase in inflation. The fund also seeks to maximize yield curve increases, either brought about by long-term interest rates increasing or short-term interest rates falling. Both are tied to big-equity market declines.

IVOL carries an expense ratio of 1.05% and has approximately $1.65 billion in assets under management.