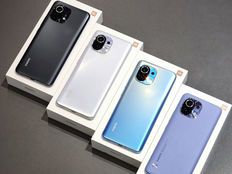 Major smartphone company Huawei, hurting from continued U.S. sanctions, has fallen by the wayside, and a new Chinese tech company is profiting in its stead. Xiaomi Corp has swept through global markets, selling the most phones worldwide in June, and looks to continue its upward movement.

Xiaomi has stepped into the gap after repeated sanctions by the U.S. have left Huawei without access to vital chips and software, such as Google, according to the Wall Street Journal.  The tech company provides phones that offer similar options to popular brands such as Apple and Samsung, but at a budget.

The company’s CEO, Lei Jun, has said that he wants to claim the second spot permanently, while aiming to replace Samsung as the world’s top smartphone seller within three years.

“We reached the top of the European market and became the number one—the first time a Chinese company has achieved this,” Mr. Lei said in Beijing earlier this month.

The KraneShares CICC China 5G and Semiconductor ETF (KFVG C+) invests in smartphones and smartphone technology companies such as Xiaomi.

The top 30 securities have a cap of 10% of the fund, and KFVG minimizes turnover by not adding a company until it is ranked 25 or higher by Fuzzy Logic, doing business as FastINDX (the index provider), and will not be removed until they it is below 35th.