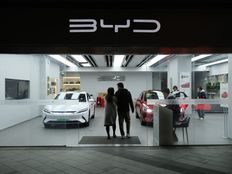 One of China’s major electric automakers, BYD Co, is close to hitting a major market-cap milestone in China, and its growth showcases the performance of the EV sector in China.

BYD is nearing 1 trillion yuan in market cap (currently around 950 billion yuan or $142 billion USD) since its stock’s meteoric rise of 66% from lows in March. Analysts are expecting that the EV automaker will produce around 1.5 million vehicles in 2022, twice the amount it produced in 2021.

It’s due in large part to BYD’s vertical integration model that has seen the company extend into battery production and even lithium mining (a key component of many EV batteries). In a pandemic world plagued by supply chain issues, what it means is that BYD has been able to sidestep many of the shortages and issues that other major manufacturers have faced.

“BYD is the only company that has fully weathered lockdowns, chip shortages, and raw material price increases, and will be best positioned during the impending battery shortage,” said Bridget McCarthy, a market research analyst at US hedge fund Snow Bull Capital Inc.

Stocks of BYD fell in May with the launch of a pollution probe at one of its factories, but even that hasn’t slowed the Chinese automaker.

Warren Buffet has been a firm believer in BYD for over a decade and Berkshire Hathaway’s investment in the company in 2008 has equated to BYD providing some of the biggest returns for Buffet’s firm today.

BYD isn’t the only company that has experienced huge gains since March lows — shares of Li Auto Inc., Xpeng Inc., and Nio Inc. are all up more than 70% in Hong Kong.

China’s National Passenger Car Information Exchange Association is expecting record-setting EV sales in June of over 500,000 according to Brendan Ahern, CIO at KraneShares.

Investing in BYD and the Major China EV Players

For investors looking to capture the potential growth of major EV producers within China and globally, the KraneShares Electric Vehicles and Future Mobility ETF (KARS C+) offers a good solution.