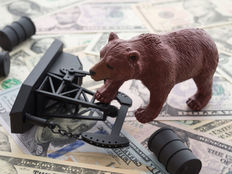 In a Bear Market, Consider This Energy Opportunity

The S&P 500 has continued its most recent sell-off, triggered this time by missed retail earnings reports, part of the overall trend of volatility driven by investors’ recession concerns as an aggressive Fed doubles down on its fight with inflation.

The major equity index is on the precipice of falling into bear territory, sitting at 18% off of its record closing level, CNBC reported; 20% is the dividing line that indicates a bear market.

Advisors and investors continue to reduce exposures to equities and bonds, and in the hunt for performance and income opportunities, many are turning to the energy sector, which has experienced a boom this year. A unique play and opportunity on the space, both in the short term and particularly in the long term, is the KraneShares Global Carbon Transformation ETF (KGHG ), which focuses on the industry leaders globally that are transitioning their operations to reduce and eliminate emissions, including major players within the energy sector.

KGHG includes companies that offer a mixture of renewable energy and fossil fuel sources for now, such as RWE AG, a German energy company that has recently reported strong earnings in the first quarter and is a major partner for the German government in its transition away from Russian fossil fuel reliance.

“At RWE, we are helping the German federal government to become independent of Russian gas – in the short term by building capacities for liquefied natural gas, and in the medium and long term by driving the expansion of renewables and ramping up the hydrogen economy,” said Michael Müller, CFO of RWE AG, in the earnings press release.

BP is also another major holding of the fund, one of the world’s major fossil fuel companies that is looking to rapidly scale up low-carbon energy alternatives, reduce emissions, and has set a 2050 net-zero target for emissions, all while maintaining cash flow, per the website.

“In a quarter dominated by the tragic events in Ukraine and volatility in energy markets, bp’s focus has been on supplying the reliable energy our customers need,” Bernard Looney, CEO of BP, said in the Q1 2022 earnings press release. “Importantly bp continues to perform and step-by-step we are making progress executing our IEC strategy – producing resilient hydrocarbons to provide energy security while investing with discipline in the energy transition.”

The fund utilizes proprietary, fundamental, bottom-up analysis using information disclosed by companies and third-party data. Companies invested in include RWE AG at 3.63% and BP PLC at 3.03%.