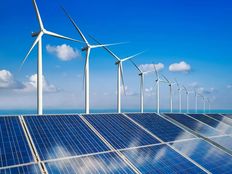 RWE Ag, a German multinational energy company, is one of the leading renewable energy suppliers in Europe as well as globally, providing both renewable and fossil fuel energy in over 20 countries, and aims to be climate neutral by 2040.

RWE anticipates that it will spend approximately €50 billion ($62.7 billion USD) by 2030 to expand its offshore and onshore wind power, solar, storage systems, hydrogen, and flexible backup systems in Germany, where energy needs are great as nuclear and coal sources require replacement soon.

First-quarter earnings saw increases in both net profit and earnings due to a 20% increase in electricity production from solar and wind power. Adjusted earnings before EBITDA (earnings before interest, tax, depreciation, and amortization) doubled year-over-year to $1.31 billion USD, and adjusted net profits more than doubled from the previous year.

The company recently brought online a 60-megawatt battery storage center in County Monaghan, Ireland, reported Renewables Now, aimed at mitigating intermittencies in energy generation as well as supplying a short-term backup option for energy storage. RWE had previously installed an 8.5-megawatt battery in County Dublin in 2021 and has a 10 MW onshore wind farm in County Kerry.

RWE is looking to expand its wind farms in Ireland with projects submitted for a 62-MW wind project in County Cork, was recently awarded a 12.2 MW solar plant and energy storage project in Germany, and broke ground on a 17.1 MW onshore wind project in western Germany.

Investing in RWE and the Energy Transition

As Europe transitions to greater renewable energy, companies such as RWE Ag stand to profit. The KraneShares Global Carbon Transformation ETF (KGHG) focuses on the industry leaders globally like RWE Ag that are transitioning their operations to reduce and eliminate emissions, including major players within the energy sector.