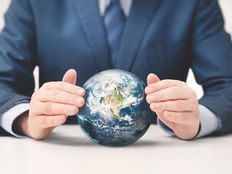 Invest “In the Problem” for Big Climate Impacts: KGHG

Within the U.S., investing in environmental, social, and governance (ESG) strategies can feel a bit like rolling the dice, as there is no current regulatory framework in place around ESG definitions. There is also no industry-wide agreement on what kind of data to measure, or even how to make those measurements. Above and beyond that, there has been a growing concern that ESG investing doesn’t necessarily offer the returns that warrant the higher fees that sometimes come with the strategies.

KraneShares is looking to push back on that narrative through its emissions transformation ETF, the KraneShares Global Carbon Transformation ETF (KGHG ). The fund doesn’t focus on the latest and greatest carbon emissions technologies and the up-and-coming companies developing them, but instead on large, established energy companies that are making the transition from fossil fuels to renewable energy and energy alternatives, cutting emissions, and thereby driving huge change within their industry.

“To effect real change you have to engage the companies that are already occupying all the real estate in these industries, and convince them to change,” explained Roger Mortimer, portfolio manager of KGHG, in a recent call with VettaFi.

The example that KraneShares likes to use to demonstrate the impacts that a transitioning company can have on the environment and investors is that of Ørsted, a major Danish energy company that formerly went by DONG (Danish Oil and Natural Gas) Energy. DONG Energy was an offshore operator with rigs and supporting infrastructure in the North Sea, one of the most hostile environments on the globe.

In 2017, DONG Energy began to branch into wind energy in the North Sea, which was a fairly easy undertaking, as the company already had all of the necessary adjacencies, as Mortimer called them, through the existing port infrastructures, vessels, and so on.

“And this is the advantage that big companies have is they already have the customers, they have the technology, they have the labor, they’re in the business, they can step into the next business very easily,” Mortimer said.

The Proof Is in the P/E Pudding

The company rapidly realized how enormously profitable offshore wind farms could be through its reduced costs of operation, improved margins, and better return on invested capital, and it committed entirely to wind energy two years later, divesting itself of the fossil fuel portion of its business and changing its name to Ørsted.

Ørsted has been voted the world’s most sustainable energy company for three years running, has attracted a whole new investor class, and the price-to-earnings ratio of the company went from 13x as a fossil fuel generator to 37x as a renewable energy generator.

KGHG utilizes a four-point checklist to identify companies like DONG Energy that are aligning for positive and realistic change. The company must have the intention of changing, it must have existing adjacent skill sets that will aid it in its energy transition, it must have the financial means to transition, and there needs to be shareholder pressure to change.

“We seek out the companies that are led by the people who believe, that have the natural skill sets to go into these new businesses, that are voting with their feet — we can follow the paper trail and verify the capital investment flows — and we also look for situations where other investors are putting pressure on them. Those companies are going to grow a lot faster than others are,” Mortimer explained.