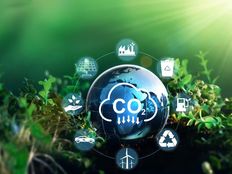 The Guide to Global Carbon Markets in May

The energy crisis in the EU, the global reverberations caused by Russia’s war in Ukraine, and the subsequent sanctions and pivot away from reliance on Russian oil and gas have had an impact on most portfolios, whether allocated internationally or domestically. One way to position for Europe’s transition to greater renewable energy, as well as the global transition away from fossil fuel dependence, is through exposure to the carbon cap-and-trade programs worldwide.

The EU’s law-making representative body, the European Parliament, is set to convene next week on May 16th and will be voting on amendments to the “Fit for 55,” the roadmap for emissions reduction of at least 55% by 2030, reported KraneShares in the Climate Market Now blog. The reforms will target the EU Emissions Trading System (EU ETS), and proposals include adjusting the emissions cap, introducing a more aggressive annual reduction of the cap, and stiffening the Market Stability Reserve that provides price stability and works to align demand and supply of allowances, per the European Parliamentary Research Service.

Within the U.K. specifically, the government has requested that the three operating coal-fired power plants continue operation past their scheduled closure date in September to help lessen the energy costs and reliance on much costlier natural gas. The U.K. is also currently considering reforming its own ETS from 2024–2030, leaning towards a higher emissions cap than its current one to keep it on target for net-zero emission by 2050.

Carbon Markets in the U.S.

The stateside cap-and-trade program in California, which also includes Quebec, is considering moving the goalposts up for carbon neutrality to 2045 after a report from the state’s Air Resources Board that modeled different scenarios for an end-goal of 2035 versus 2045. If and when the new timeline is enacted, it will mean changes to the low carbon fuel standard for California and the cap-and-trade program in 2023.

The Regional Greenhouse Gas Initiative that includes Northeastern states in the U.S. has a solid support from utility buying that is expected to continue through the summer as carbon-emitting fuel sources like oil will continue to experience increased demand. Also looming is the potential addition of Pennsylvania to RGGI in the third quarter, though the state’s entry is still in contention from within and is caught up in state courts.

“Any delay to the state’s debut could be seen as bullish since Pennsylvania would have the largest allocation of all participating states, and its entry is seen as bringing additional supply to the market,” KraneShares explained.