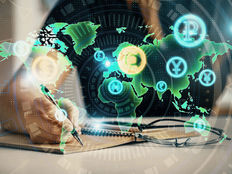 Russia’s deployment of troops into two regions of Ukraine means that Europe’s already-strained natural gas resources and ongoing energy crisis are positioned to continue, especially with the announcement by Germany regarding the hold on the Nord Stream 2 underground natural gas pipeline that runs between the two nations, reports the Wall Street Journal. The increase of fossil fuel prices could see carbon allowance markets experience a surge as more allowances are sought by companies.

“2022 has been an interesting year already for carbon markets. With new proposals around upper price band triggers, we’ve seen some volatility however our modeling would suggest that even IF the proposal was adopted, it wouldn’t meaningfully limit upside potential. That said, carbon markets have rallied back on Ukraine escalation,” said Luke Oliver, managing director, head of strategy at KraneShares in a communication to ETF Trends.

The Nord Stream 2 pipeline is almost complete and operable, and the plan had been to funnel Russian gas exports into Germany in a move that Germany has maintained is critical for its natural gas supply. Now, fears that Russia will retaliate by withholding future natural gas supplies to all of Europe have driven already-high prices even higher in the EU, crossing the $90 per megawatt-hour equivalent for natural gas.

The move by Germany isn’t one that will impact immediate supply, as the EU bloc had already secured enough natural gas to get countries through the winter, which has been a grueling one for prices. Natural gas prices are currently five times higher than they were a year ago and were exacerbated when Russian gas company Gazprom PJSC scaled back contributions to Europe, saying that it had met its contracted commitments to the EU.

“Halting certification of the Nordstream2 gas pipeline will put increasing pressure on natural gas prices, which in turn make fuel switching from coal to gas more expensive and increases demand for carbon allowances. This puts pressure on the entire energy complex. There is no doubt this is positive for carbon price, albeit sadly not necessarily positive for emission reductions,” Oliver explained.

The fund’s benchmark is the IHS Markit Carbon EUA Index, an index that tracks the most-traded EUA futures contracts, a market that is the oldest and most liquid for carbon allowances. The market currently offers coverage for roughly 40% of all emissions from the EU, including 27 member states as well as Norway, Iceland, and Liechtenstein. The annual cap reduction was recently increased from 2.2% to 4.2% to meet long-term carbon emission targets.

As the fund is actively managed, it may invest in carbon credit futures with different maturity dates or weight futures differently from the index. The fund potentially trades in CTFC-regulated futures and swaps above the CFTC 4.5 limit and is therefore considered a “commodity pool.”