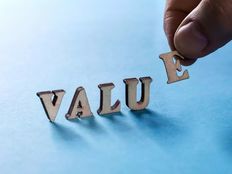 A Value ETF Displaying Its Mettle

As is widely documented, growth stocks are among the most egregious offenders when it comes to 2022 share price declines.

Though not perfect, the broader universe of value equities and the related exchange traded funds are sharply outperforming their growth rivals as well as broad market equity funds. The American Century STOXX U.S. Quality Value ETF (VALQ B) is part of that group.

VALQ, which follows the iSTOXX® American Century® USA Quality Value Index, is outpacing the S&P 500 by more than 700 basis points year-to-date while also topping a slew of rivals in the large-cap value category.  The gap between growth and value is wide, and that could be a sign of an increasingly favorable environment for ETFs such as VALQ.

“The 15% gap between Value and Growth is obviously high by historical standards, and represents a dramatic reversal from recent trends. (As recently as nine months ago, the gap favored Growth by more than 10%.),” notes S&P Dow Jones Indices.

In recent weeks, VALQ has been, not surprisingly, trouncing growth rivals while performing less poorly than the broader market. With the way things are setting up in the current climate, including rising interest rates and high inflation, it’s possible that VALQ continues along this trend, as it has some tailwinds that are difficult to ignore.

“The acceleration of Value’s performance is nearly as impressive from this perspective. At the end of April 2022, Value was 6.5% ahead of Growth; just five months ago, for the year ending November 2021, Growth was 13.3% ahead of Value,” adds S&P Dow Jones.

VALQ has more to offer investors. As its name implies, the fund marries the quality and value factors. That’s pertinent to investors because many value stocks attain that status for dubious reasons, which is to say they are junkier fare. By combining quality and value, VALQ, which is home to 237 stocks, helps investors avoid value traps.

That’s something to consider at a time when the value/growth gap is wide and as financial markets are making it clear that unprofitable companies with strained balance sheets are out of favor today.

“Value’s 15% differential for the first four months of 2022 was not only visibly above average, it’s at the 98th percentile of all such spreads in our historical data. The only higher readings came in the deflation of the technology bubble more than 20 years ago,” concludes S&P Dow Jones. “Comparing Pure Value and Pure Growth produces much the same result.”