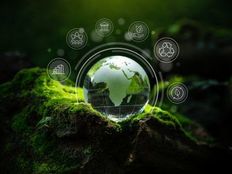 With the Senate passing the previously presumed dead Inflation Reduction Act, the U.S. is one step closer to reducing greenhouse gases by 40% below 2005 levels by 2030. The bill includes $369 billion in climate and energy provisions. While less than the $550 billion originally envisioned as part of the $2.2 trillion Build Back Better Bill from last year, this still represents “the biggest investment in clean energy sources in U.S. history,” according to Politico.

Climate groups have praised the bill’s passage. The Natural Resources Defense Council issued a statement calling the passage of the bill in the Senate “the most significant action the U.S. has ever taken to combat climate change,” adding that the bill “will help the U.S. deliver on its undeniable responsibility to the rest of the world to do its part to address this global crisis.”

Meanwhile, American Clean Power has stated that this “unprecedented investment in clean energy will supercharge America’s clean energy economy and keep the United States within striking distance of our climate goals." The Rocky Mountain Institute announced that this “legislation gives the U.S. a real chance to reach its Paris Agreement target.”

While the bill awaits passage in the House of Representatives, investors can still make sure their portfolios adhere to environmental, social, and governance principles. And active management can help purify holdings to stay in line with investors’ ESG preferences. Investors looking to gain ESG exposure through the actively managed ETF wrapper may want to consider the American Century Sustainable Equity ETF (ESGA C).

ESGA blends fundamental financial analysis with a strategy that invests in U.S. large-cap companies with large growth and value potential that rank highly on ESG metrics. The actively managed fund employs a multi-factor approach — growth, momentum, and value — for more factor diversification that can perform in any market. Additionally, the ETF aims to construct a competitive portfolio with favorable risk/reward profiles and impressive ESG credentials.

“ESG funds are an increasingly popular segment of the ETF marketplace, but ESGA is one of the rare ESG funds managed by stock pickers rather than an index,” according to its analyst report from FactSet.