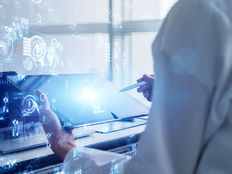 American Century Investments offers a variety of mutual funds and exchange traded funds for investors, but it goes a step beyond in giving back, a value that is at the core of what the firm was founded on.

Founded in 1958 by James E. Stowers Jr., a physician at the time, American Century began with three employees and offered two funds. Now, the firm offers 24 exchange traded funds alone and continues expanding its line-up in new and innovative ways.

In the 1980s, tragedy struck when Jim Stowers was diagnosed with cancer, which he battled and fortunately survived. His struggles with the disease inspired both him and his wife to give back to others.

Jim and Virginia Stowers went on to establish the Stowers Institute for Medical Research in the 1990s, using their own money to found and fund it. Shortly thereafter, Virginia, formerly a registered nurse, was diagnosed with breast cancer, which she fought and survived, cementing the importance of the Institute to the couple on a deeply personal level.

In the 2000s, the American Century Foundation, which funds charities, was created, and the BioMed Valley Discoveries facility was opened. BioMed Valley Discoveries is a clinical stage biotechnology company whose goal is to “address unmet patient needs across a wide spectrum of diseases.” Funding comes largely from its ownership stake in American Century Investments, with close to $1.5 billion in dividends accrued since its inception.

The 2010s brought a Financial Services Cares Award to American Century and the Institute for their roles in the fight against cancer, and BioMed Valley Discoveries, along with Johns Hopkins Institute, announced the use of a tumor-destroying bacteria that has yielded promising results.

The Stowers Donate Wealth for a Better Future

The Giving Pledge, created by Bill and Melinda Gates and Warren Buffet, set new precedents for philanthropy in addressing some of society’s biggest issues. Jim and Virginia Stowers were among the first 40 people to sign the pledge and have donated more than 99% of their wealth to medical research.

American Century believes in a better future and offers several exchange traded funds that invest in sustainability; they were the first firm to offer active ESG ETFs, launching them in July of 2020. The Sustainable Growth ETF (ESGY), the Sustainable Equity ETF (ESGA), and the Mid Cap Growth Impact ETF (MID) are all actively managed funds that screen for ESG within their securities and are part of the overall vision of building a better world and future that American Century believes in at its core.