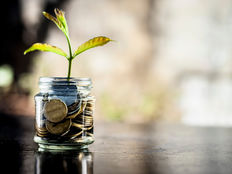 With rates going up to the highest levels they’ve been in a long time, Edward Rosenberg, senior vice president and head of exchange traded funds for American Century Investments, thinks “there’s probably a better way to gain exposure to the fixed income market instead” of through the Bloomberg U.S. Aggregate Bond Index.

Speaking with VettaFi’s EIC, Lara Crigger, in April at Exchange: An ETF Experience in Miami Beach, Rosenberg said that fixed income investors should be “taking advantage of things like shorter durations, or higher yields out there that can be really beneficial to a portfolio, even in a rising rate environment.”

As for what should investors look for in fixed income, American Century Investment’s vice president of ETF product and strategy Sandra Testani noted that since “the fixed income markets have a wide variety of different risk and return characteristics,” she believes “active management is critical in the fixed income markets, especially in this environment today.”

The reason why, according to Testani, is because “bond indexes really leave a lot to be desired; they overweight some of the more indebted names.” Meanwhile, an active manager “can focus on making sure that the corporation has the strength to withstand and maintain its coupon payments.”

She also recognizes the possibility of upgrading, so American Century has some exposure in the double-B segment of the market, otherwise known as high yield. But if you identify companies with potential for an upgrade, you can take advantage of that, which is a real benefit from a pricing perspective.

Testani added that since American Century had a view that rates were likely to go up, they positioned their portfolios from the onset of the year “to be a bit short,” so they “can be a bit more protective and a little bit more defensive,” thereby keeping some dry powder to take advantage of opportunities as they present themselves.

What sets American Century’s approach to active management apart from the rest, according to Rosenberg, is that ACI’s portfolio managers are “looking for outperformance through bond selection.”