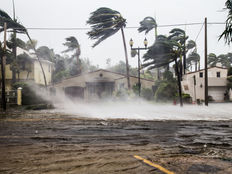 After leaving South Louisiana stricken with floodwaters and astronomical wind damage, including the catastrophic failure of the power grid in New Orleans, Ida continued to wreak havoc as it made its way through the U.S.

Wednesday saw unprecedented flooding and tornado activity in New York and New Jersey brought on by the post-tropical cyclone. Some areas were forecast to receive between three to six inches of rain but what ensued was mass flooding in areas that see little heavy rainfall, reported The Wall Street Journal.

The Philadelphia and New York City corridor recorded two to three inches of rain per hour, with City Park recording 3.25 inches in a single hour, the highest amount on record for the area. Newark, New Jersey recorded 3.24 inches in an hour of its total 8.44 inches on Wednesday, catching people and officials off guard with the intensity of the rainfall.

Flash floods, tornadoes, power outages, and record rainfall saw the loss of 40 lives in a storm system that spread from Boston to Baltimore Wednesday. Overall the system dropped at least two inches of rain on over 58 million people and up to ten inches in some areas, in a trend of incrementally worsening weather as global warming effects begin to be felt.

As increasingly worse weather systems driven by global warming cause disruption and destruction, the need to reduce emissions becomes tantamount. Investing in companies working to operate with reduced emissions and a smaller carbon footprint is becoming an increasing priority for many investors.

The American Century Sustainable Equity ETF (ESGA C+) measures the ESG performance of a company, weighing environmental impact as one of the major factors for qualification. It goes a step beyond though, and it also looks at the other aspects of ESG, such as turnover of employees and corporate leadership, to name just a few. The fund invests in U.S. large cap companies with large growth and value potential that rank highly on ESG metrics.

ACI’s proprietary model assigns a score to each security for financial metrics and a separate score for ESG metrics, then combines them for an overall score.

The highest-scoring securities are selected within each sector, creating a portfolio with strong performance and higher ESG ratings than the stocks in the S&P 500 Index.

The fund is a semi-transparent ETF, meaning that allocations are disclosed on a quarterly basis, not daily. As of its last disclosure, ESGA held companies like Alphabet (GOOGL), Home Depot (HD), and Microsoft (MSFT).

ESGA has a total annual fund operating expense of 0.39% and total assets of $150 million.