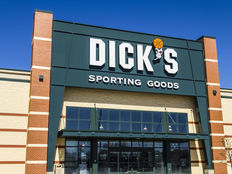 Dick’s Sporting Goods saw record sales last year, up 9.9% year-over-year, and is also being headed by a new CEO, the third to run the company since its inception in 1948, reported the Wall Street Journal.

Lauren Hobart is the sporting goods store’s newest CEO, its first nonfamily CEO as well as its first female one, and she joins the ranks of less than 50 female CEOs of major companies in the U.S. Under her leadership, Dick’s is expanding market share by introducing larger stores that offer interactive elements, such as rock-climbing walls, stores that cater more specifically to outdoor shoppers, as well as working to expand interest among female shoppers.

These changes come at a time when supply-chain woes continue to prove troublesome for all industries, but as of second quarter, Dick’s was up 19.2% compared to the same quarter last year.

Taking over from Ed Stack, former CEO and current chairman, Hobart explained that that her prioritizing people, both customers and coworkers, blended well with his entrepreneurial approach.

“We bring very different things to the table when it comes to a partnership. He’s a merchant through and through, and he’s an entrepreneur, and I had a history in marketing and strategic planning. We just balanced each other out,” she said in an interview with WSJ.

While Hobart believes firmly that her nomination and subsequent taking over as CEO had nothing to do with being a woman, she does acknowledge that being a woman has proved to be “a huge asset” in her leadership as CEO, from her people-first strategy to expanding the customer base.

One major way Hobart has been able to use her gender to reach customers was in a recent ad campaign that showcased her along with other female executives at Dick’s. It was a strategy that has made a difference, not just for female customers, but also towards empowering women by highlighting their female leadership front and center.

“There are a lot of assumptions that people make about who’s running this company. We decided that maybe people would be interested to see that we’re really working on behalf of women because we are women. We got incredible reactions—shocking to me actually, just how much people were looking for that kind of inspiration,” Hobart said.

An actively managed ETF, AVUV combines the typical benefits of following an index — diversification, low turnover, and a transparency of exposures — with the flexibility to capture price movements as they happen.

For benchmarking purposes, the fund uses the Russell 2000 Value Index, which tracks the 2,000 smallest capitalization stocks of the larger Russell 3000 Index, but the ETF does not replicate this index.

AVUV’s portfolio managers use fundamental screens such as shares outstanding, cash flow, expenses, revenue, and book-to-value to select stocks. Smaller companies with high profitability are weighted more heavily than those with lower returns and higher prices.

In addition, AVUV can also invest in derivatives, such as future contracts, currency forwards, and swap agreements to gain exposure to equities and manage cash flow.

As of the end of August, some of the top sector allocations for the fund include financials at 30%, consumer discretionary at 18%, and industrials at 16%.