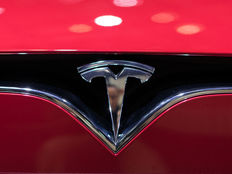 Last month, Tesla Inc. passed the $1 trillion mark in market value, becoming the most valuable car company, and as its stock continues to surge, it is carrying markets with it, reported Reuters.

Rental car company Hertz placed an order last month for 100,000 Tesla vehicles by the end of next year, the event that pushed the company into the $1 trillion mark to join the likes of Microsoft, Alphabet Inc., Apple, and Amazon.

“Electric vehicles are now mainstream, and we’ve only just begun to see rising global demand and interest,” Hertz interim CEO Mark Fields told Reuters. Tesla is working to bring two new plants online, one in Austin and one in Berlin, to help meet the rising demand for its EVs.

The S&P 500 gained 8.29 points to close at new highs, with its consumer discretionary sector driven upwards 1.5% by Tesla’s most recent surge, reported Reuters. Stocks for the automotive manufacturer were up 8.5% at close after Tesla’s recent announcement that it would be opening its supercharging network to other EV brands.

Recent earnings reports have seen wobbling markets turn back towards their previous upward momentum as major growth stocks have outperformed expectations in the midst of supply chain issues and inflationary fears.

The American Century Focused Dynamic Growth ETF (FDG C+) is an active, semi-transparent fund that seeks long-term capital growth by investing primarily in, but not limited to, large-cap growth companies.

FDG seeks to invest in early and rapid stage growth companies that are expected to appreciate in value, evaluating the individual companies instead of market forecasts when making investment choices. The strategy of the fund is based on the belief that, in the long-term, the price movements of stocks trends along growth in revenue, earnings, and/or cash flow.

As such, the portfolio managers seek companies that are exhibiting accelerated growth in their earnings or revenue, compared to market expectations, peers, recent market trends, and the fund’s benchmark, the Russell 1000 Growth Index.

As a semi-transparent fund, holdings are disclosed on a quarterly basis instead of daily.