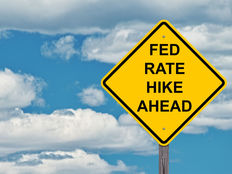 On Wednesday, growth stocks and related exchange traded funds were relatively flat but held up better than their value counterparts as Federal Reserve officials signaled an interest rate hike that will come sooner than previously expected.

U.S. markets weakened after encouraging signs that developed economies were ending lockdowns and central banks would keep easy money policies flowing. However, Fed officials warned that they could hike interest rates by late 2023, following a rapid economic recovery and increasing concerns about inflation, which has been higher than expected, the Wall Street Journal reports.

The officials’ median projection revealed they could lift the benchmark rate to 0.6% by the end of 2023, sooner than they had signaled in March.

“Having lived through the inflation of the ’60s and ’70s, the two things you need for inflation are shortages and psychology,” Ed Keon, chief investment strategist at QMA, told the WSJ “We’ve seen evidence of shortages, but it hasn’t quite got into everyone’s head that ‘I need to protect myself from inflation. I need to demand higher wages. I need to find a way to protect myself from my standard of living going down, so I need to be aggressive at getting out in front of inflation.’ We haven’t seen that change yet, but I think it’s possible over the next several months we could.”

The fears, though, were pared down after data that showed economic activity moving at a breakneck pace. For example, retail sales dropped in May while producer prices rose, offering a mixed picture of the recovery.

“We’ve had the initial exuberance and we are catching up a little bit to reality. Markets are less liquid—being summertime—and they are also digesting some of this anticipation,” Shaniel Ramjee, a multiasset fund manager at Pictet Asset Management, told the WSJ. “There have been some data points that have come in lower than expected, such as retail sales. It has reduced the cause for concern that the Fed could taper faster than expected.”

Investors who are interested in the growth style can turn to strategies like the American Century Focused Dynamic Growth ETF (FDG C+), which is designed to invest in early-stage, high-growth companies. FDG is a high-conviction strategy designed to invest in early-stage, rapid growth companies with a competitive advantage, along with high profitability, growth, and scalability.

Additionally, investors can look to the American Century STOXX U.S. Quality Growth ETF (QGRO B-). QGRO’s stock selection process is broken down into high-growth stocks based on sales, earnings, cash flow, and operating income, along with stable-growth stocks based on growth, profitability, and valuation metrics.