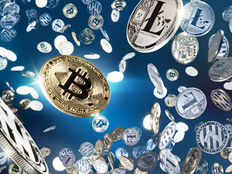 2021 Has Ushered an Influx of New Cryptocurrencies

According to a new "Coindesk":https://www.coindesk.com/crypto-coin-listings-exploded-in-2021 report, data aggregators have added more than 2,000 new cryptocurrencies to their listings since the beginning of 2021.

Representatives from all three data aggregators agree the influx of new cryptos can be linked to the rising prices of popular cryptos and meme coins, as well as public crypto support from big financial institutions and celebrities.

Of the thousands of new cryptos, however, only a few are likely to stick around.

The initial coin offering (ICO) boom in 2017 saw a similar influx of new cryptos, but eventually the majority of new coins were either found to be scams or failed to gain financial traction.

Similar to now, the 2017 ICO boom coincided with the then all-time high price of Bitcoin. However, data aggregators say that the number of new digital asset projects today is even higher than it was then.

Each data aggregator has its own internal process for new vetting crypto projects applying for listings. Although exact criteria are not disclosed, all three data aggregators consider active trading volume, liquidity, and the reputation of both the coin and its creators when making their assessments.

According to CoinGecko, there have been nearly 16,000 crypto assets added between 2014 and 2021, including active assets and failed or disrupted ventures.

The rise of decentralized exchanges (DEXs) had made new tokens easier to create and market than ever. These DEXs are the birthplaces of many “meme coins” and scam coins.

Because of the high number of scams coming from DEXs, data aggregators have had to strengthen their listing criteria, so as not to legitimize coins that end up being fraudulent.

Meme coins, especially dog-themed ones, are more popular than ever. According to Coindesk, meme coins accounted for three out of four applications at CoinMarketCap this quarter.

In order to succeed, most meme coins have to go viral. If they don’t, most will fail within a few months.

While many meme coins are created by novice teams looking to get rich quick, some meme coin projects do seem to be created with the genuine intention of improving the crypto space.

However, with so many new coins on the market, it is difficult for listing sites to truly predict which coins have the potential to succeed.