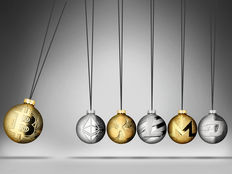 Altcoins Are Expanding Rapidly in the Crypto Markets

At the beginning of 2021, Bitcoin reigned as the champion of cryptocurrencies, cornering 70% of the crypto market, as reported by CNBC. Now however, the crypto markets are rife with altcoins, all eating away at Bitcoin’s share of the market.

At the end of July, Bitcoin claimed only 48% of the market share of cryptocurrencies. With a burgeoning $1.6 trillion cryptocurrency market, new competition is being introduced daily.

Currently, there are over 11,000 different kinds of altcoins on the market, according to CoinMarketCap. Altcoins encompass a variety of crypto areas; there are tokens such as ether, which are built on blockchain technology that plays host to a vast majority of DeFi applications, while there are also tokens such as stablecoin, like tether, which are tied to fiat currencies.

“Everybody’s trying to do something that hasn’t been done before,” Mati Greenspan, Quantum Economics founder and CEO, told CNBC in an interview.

BLOK Believes in the Technology

The addition of so many altcoins is indicative of a market rife with blockchain competition. Amplify ETFs believes in this potential, and invests in the major movers at the fundamental level of blockchain itself.

The Amplify Transformational Data Sharing ETF (BLOK B-), which now tops $1 billion in AUM and is the largest of the blockchain ETFs, is actively managed and invests in companies directly involved in developing and using blockchain technology.

The BLOK ETF spreads its holdings across the size spectrum: as of the end of June, the fund has a market capitalization breakdown of 45.7% of holdings in large cap companies, 24.8% in mid cap companies, and 27.2% in small cap companies.

A sampling of top holdings as of end of June included MicroStrategy Inc, a cloud-based, intelligent app developer, at 6.74%, Marathon Digital, a Bitcoin mining company, at 3.99%; and Coinbase Global Inc, a cryptocurrency exchange platform, at 3.74%.