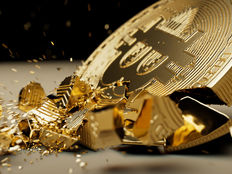 Bitcoin’s most recent losses have put it relatively even with prices from the beginning of October and a far cry from recent November highs. While investors with spot bitcoin exposure might have lost a lot, it’s the crypto miners who are paying the price in market capitalization.

Prices on Monday of around $46,000 for bitcoin were far off the record highs experienced in November when the most popular cryptocurrency hit nearly $70,000, reports Coindesk. Bitcoin miners, who earn profits in bitcoin and therefore are the most exposed to the spot price of bitcoin, all saw shares falling between 4–9% on Monday.

Marathon Digital, one of the largest and most well-known bitcoin miners, has seen its market cap fall approximately 51% from November highs of $7.6 billion down to $3.8 billion. Analysts are still fairly positive in how they view miners within the crypto space as an investible asset, despite volatility.

It’s important to look at performance for the year overall also, instead of recent performance only; bitcoin is up nearly 59% YTD and ether is up 414% YTD, which are enormous gains, all things considered. In addition, as the price of bitcoin recovers and begins to rise again, miners have greater upside opportunity.

For now, the recent pullback is one that should slow the creation of bitcoin tokens on the network, lowering the total hashrate in the interim as the crypto miners are still in a “super profitable” position for the year, according to Brendler.

Investing in the Broad Blockchain Innovation

The Amplify Transformational Data Sharing ETF (BLOK B-), which currently has $1.4 billion in AUM and is the largest of the blockchain ETFs, is actively managed and invests in companies directly involved in developing and using blockchain technology. BLOK was also the first blockchain ETF approved by the SEC and launched in 2018.

BLOK spreads its holdings across the size spectrum, investing in all market caps. As of the end of September, within the blockchain industry, top allocations included transactional at 30.0%, crypto miners at 28.0%, and venture at 10%. BLOK invests across the blockchain landscape, in miners, exchanges, and developers.

While previous top three holdings had been balanced more in favor of bitcoin miners, because the fund is actively managed, it pivots within the space to seek the best returns and performance at any given time. The top three holdings currently are NVIDIA (NVDA) at 5.04%, Coinbase Global (COIN) at 4.96%, and CME Group (CME) at 4.24%.

BLOK has an expense ratio of 0.71% and currently has 51 holdings.