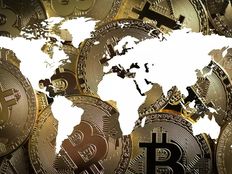 With bitcoin prices faltering, it’d be easy for investors to doubt that adoption of digital assets will take flight as hoped.

On the other hand, investors, particularly those new to the digital assets space, should remember that adoption of disruptive technologies doesn’t always occur on the smoothest of terms. Bumps are to be expected, and that could be a sign that exchange traded funds, such as the VanEck Digital Transformation ETF (DAPP), might come back into style.

DAPP is an equity-based play on the broader digital assets ecosystem, meaning it has ample exposure to bitcoin adoption trends. Fortunately, some analysts see that outlook brightening. That’s a plus when considering this year’s dour price action.

“All disruptive technologies follow a similar exponential S-curve pattern, but […] newer network-based technologies continue to be adopted much faster than the market expects,” according to Blockware Solutions.

In evaluating the bitcoin adoption curve, Blockware Solutions examined prior adoption trends for what were, at the times of debut, considered disruptive technologies. Those include automobiles, radio, landline and mobile phones, electric computers, smartphones, tablets, and social media.

“We believe Bitcoin adoption will reach saturation quicker than many of these technologies for the following reasons: direct monetary incentives to adopt, macro environment end game, and rails of adoption growth being the internet; and the most efficient state of informational spread on the internet ever,” noted the research firm.

Integral to the bitcoin adoption thesis is that it’s occurring along digital lines. The internet speeds up access to information, potentially empowering investors to make educated decisions on whether or not digital assets are appropriate for them.

For its part, DAPP holds 25 stocks. That’s a concentrated lineup, but one that’s broad in terms of reach into the digital assets universe. The ETF’s roster includes bitcoin miners, which are tethered to adoption of the digital currency because share prices of these companies are highly correlated to bitcoin prices.

DAPP also includes exposure to broader crypto plays, such as Block (NYSE:SQ) and Coinbase (NASDAQ:COIN). That depth positions DAPP, by way of equities, to potentially capitalize on increasing bitcoin adoption, and that’s exactly what Blockware Solutions expects is going to happen over the next decade or so.

Citing a metric called Cumulative Sum of Net Entities Growth and bitcoin’s predicted “CAGR of 60% we forecast that global Bitcoin adoption will break past 10% in the year 2030,” noted the research firm.

Bottom line: Bitcoin adoption is still in the early innings, perhaps just the first or second one.

“Prior technological adoption curves show us that adoption occurs first slowly and then rapidly; on-chain data shows us that Bitcoin is still in the ‘slow’ phase. Just as there is a risk to owning BTC (through volatility), there is also a risk of not owning BTC during this time period of accelerated adoption,” concluded Blockware.