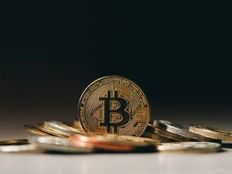 Bitcoin Ascent to Official Status Might Boost This ETF

Despite plenty of turbulence this year, bitcoin remains the largest cryptocurrency by market capitalization, but it’s still far from “official currency” status of any form.

Much of that has to do with adoption rates, but on the upside for digital asset devotees, there’s ample room for growth regarding bitcoin adoption. As that percentage increases, the digital currency’s status will be solidified, potentially providing support to other assets as well.

Investors looking to play that trend via equities have multiple options among exchange traded funds, including the VanEck Digital Transformation ETF (DAPP C+). DAPP follows the MVIS Global Digital Assets Equity Index and could be one of the ideal equity-based plays with which to capitalize on longer-ranging bitcoin adoption rates and the cryptocurrency’s status ascent.

“And while it’s impossible to say exactly when Bitcoin will reach global adoption, the current growth rate suggests that it could happen within the next 23 years. That’s to say that Bitcoin could become an official medium of exchange by 2045. However, Bankless Times says that this is only a prediction and that the actual time frame could be shorter or longer depending on various factors,” reports Bankless Times.

DAPP is a potentially attractive way for investors to participate in various digital asset adoption and usage trends without having to hold those assets directly. The ETF, which is nearly a year and a half old, is home to 24 stocks – most of which are “crypto-correlated.” Translation: Although DAPP doesn’t directly hold bitcoin, the fund’s structure positions long-term investors to capitalize on some compelling trends.

“Our research suggests that the world will have adopted Bitcoin payments by 2045, based on data from historical adoption curves. These point to Bitcoin global adoption reaching 65% by that year,” said Bankless Times CEO Jonathan Merry.

Global adoption of bitcoin may ascend to 10% by 2030. Should that forecast prove accurate or close to accurate, DAPP holdings such as Coinbase (NASDAQ: COIN), Block (NYSE: SQ), and the plethora of bitcoin miners held by the ETF are credible beneficiaries.

“Bankless Times bases its prediction on a recent Blockware Solutions report on Bitcoin adoption. The latter had made projections on the crypto asset’s growth based on the average and weighted average of the historical tech adoption curves. Likewise, Blockware’s survey considered Bitcoin’s adoption growth rate,” according to the research firm.