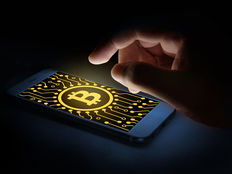 Bitcoin recently accomplished something only a handful of US companies ever have. It crossed into the $1 trillion market capitalization club last Friday.

That’s a testament to rising institutional investment and expectations that Bitcoin is a credible store of value, among other factors. Interestingly, $1 trillion appears to be more a floor than a ceiling for the largest cryptocurrency.

“Bitcoin’s total market capitalization, or network value, crossed $1 trillion for the first time on Friday as its price passed $54,000, writes ARK Invest analyst Yassine Elmandjra. “Despite its run, ARK’s analysis suggests that bitcoin is early on its path to monetization. In our view, bitcoin’s current $1 trillion network value could scale to $6 trillion during the next five years.”

Bitcoin Endorsements Are Rolling In

Institutional investors are playing an increasingly prominent role in the Bitcoin market, and that role is likely to continue growing. For smaller investors, there are tangible benefits to this scenario.

Cryptocurrencies remain largely unregulated, which has deterred many potential investors. The Securities and Exchange Commission has so far rejected exemptive relief for any attempt to roll out a Bitcoin ETF, arguing that there is not enough protection against fraud and market manipulation in the cryptocurrency market. However, institutional investors are moving past those concerns and embracing Bitcoin in a big way.

The use case for Bitcoin is also growing.

“If Bitcoin were to capture 10% of US bank settlement volumes, the value of the Bitcoin network could scale to $1.5 trillion,” notes Elmandjra. “A bitcoin allocation approximating a 5% probability that a corrupt or misguided regime will confiscate assets – whether by fiat money inflation or outright seizure – during an individual’s lifetime would add $2.5 trillion to its network value.”

Historically, gold has been a safe-haven asset for investors. In a changing world, how much could Bitcoin benefit from eating away at gold’s market share?

“As the global economy transitions from physical to digital, bitcoin could challenge gold as a global store of value. According to our research, if it were to capture 10% of physical gold’s market cap, the network value of bitcoin would nearly double, increasing by roughly $1 trillion,” concludes Elmandjra.