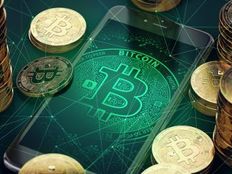 One of the most frequent criticisms of bitcoin is that its environmental credentials are rather lacking. That is to say, it’s widely known that bitcoin mining is an energy-intensive endeavor that is drawing increasing scrutiny.

On the other hand, crypto enthusiasts and miners themselves are aware of the environmental scrutiny, and some are taking steps to boost adoption of renewable energy sources as foundations of the mining process. That could have positive implications for exchange traded funds such as the Fidelity Crytpo Industry and Digital Payments ETF (FDIG ).

FDIG follows the Fidelity Crypto Ind & Digi Paym NR USD, and several of its 39 holdings are bitcoin miners, making the Fidelity fund a relevant play on that industry’s efforts to increase use of green energy. Interestingly, some experts argue that bitcoin’s current carbon footprint isn’t as bad as some investors are led to believe.

“And for Bitcoin’s critics who point at Bitcoin, which is less than a billion dollars a month in total revenue. And, you know, probably you know, $200 a month in, in, in energy spend to fossil fuels. If that like maximum, maybe a hundred million dollars a month is the total global spend on fossil fuel energy worldwide to say coal plants are staying open because of Bitcoin,” said Troy Cross, fellow with the Bitcoin Policy Institute, in a recent interview with Bitcoin Magazine.

Cross compares the political discourse currently aimed at bitcoin mining to criticism of nuclear energy in the 1970s and 1980s, claiming that some policymakers are aiming to create narratives.

“We’re not gonna change their minds. Right. So we gotta wait, we gotta work on the next generation,” said Cross in the interview. “And so those two in particular, but others are, you know, Elizabeth Warren, they are trying to do the same thing for Bitcoin, cement a narrative and, and intertwine it with an identity so that it cannot be shed at the pain of, at, at the cost of your own, your own ego.”

Cross adds that the future intersection of bitcoin and sustainable energy sources is attractive, particularly if governments and central banks limit interference.