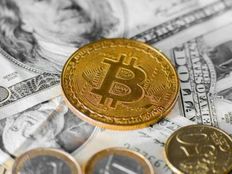 Bitcoin May Have Inflation-Fighting Credentials

One of the results of persistent inflation is debate pertaining to which assets offer adequate protection against rising consumer prices.

As inflation proved more persistent than transitory, there was hope that bitcoin would be additive to investors’ inflation-fighting toolkits. After all, the largest cryptocurrency is often referred to as digital gold. However, bitcoin slumped through the first half of this year, prompting some market participants to doubt the asset’s ability to protect against inflation.

Still, some market observers see things differently, and if their views ultimately prove accurate, there could be benefits to considering exchange traded funds such as the Invesco Alerian Galaxy Blockchain Users and Decentralized Commerce ETF (BLKC ). Steven Lubka, the managing director of private consumers at Swan Bitcoin, is among those who believe that bitcoin can be an inflation buffer.

BLKC, which follows the Alerian Galaxy Global Blockchain Equity, Trusts and ETPs Index, is home to 63 holdings, making it a broad play on a potentially lengthy bitcoin recovery as well as an avenue for investors looking to gauge the digital asset’s inflation-fighting durability.

BLKC’s direct bitcoin exposure is sourced via a 13.09% allocation to the Grayscale Bitcoin Trust BTC (GBTC). Additionally, the Invesco ETF is home to shares of multiple bitcoin miners. Those stocks were repudiated in the first half of 2022 as the digital currency’s price slumped.

However, some analysts say that some of the higher-quality bitcoin miners may now be offering valuation opportunity, and as the digital asset rebounds, some BLKC mining holdings are likely to follow suit.

As for inflation, Swan Bitcoin’s Lubka says bitcoin may ultimately prove more effective in warding off inflation than it is being given credit for today.

“He also points out that Bitcoin is a better hedge against inflation than stocks or real estate since it doesn’t need maintenance, nor is it affected by the risk involved in stock-picking,” according to CoinTelegraph.