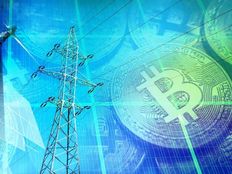 The banning of cryptocurrency mining and crypto in China has given bitcoin mining the boost it needed to restructure and evolve mining practices in more energy-conscious ways. Crypto miners in the U.S., Canada, and Europe are leading the way in the greening of crypto mining as innovation continues within the space, reports CoinDesk.

“China’s ban that resulted in the down-powering of mining infrastructure was a trillion-dollar present to the U.S.,” said Core Scientific co-founder Darin Feinstein.

Bitcoin mining in particular has collected a reputation for its large carbon footprint that is driven by the energy demands of the rigs that do the mining. When China housed the majority of bitcoin miners, the overall power derived from sustainable sources was only 37% for the industry; now, with miners having settled in the U.S. and Canada, 59% of the industry is sustainably powered.

“I don’t know of any other industry that’s improving its power mix quite that rapidly,” said Charlie Schumacher, vice president of corporate communications at Marathon.

Not only are mining companies settling into areas that offer easy access to renewable energy sources, such as Texas, which offers wind and solar power, but they are forming relationships with the power companies of their local grids.

“Our industry really can quite legitimately, effectively and uniquely release energy utilization to the grid; it’s almost as if we’re acting as a battery,” said Mike Levitt, CEO of Core Scientific.

Many major bitcoin operations have agreements with the operators of the grids they are on to power down operations during peak demand times for the grid. In turn for being a flexible load provider and contributing power back to the grid when it needs it most by putting operations in sleep mode, bitcoin mining companies in Texas gain discounts while also preventing the need for peaker power plants. These plants are often the oldest, run the dirtiest, and are the most expensive ones to run, explained Levitt.

Major miners such as Argo Blockchain have set up plants in Texas and are generating some of their own renewable energy from solar panels and wind turbines, reports the New York Times. Eventually, Peter Wall, CEO of Argo, hopes to be able to make deals with local renewable energy companies to derive most of Argo’s power from renewable sources.

“A lot of those renewable energy producers are still a little bit skeptical of cryptocurrency,” Wall said. “The crypto miners don’t have the credit profiles to sign 10- or 15-year deals.”

For now, the newness of the crypto industry continues to be a barrier, though there is the hope that as mining companies establish themselves over time, they can also help drive the need for more renewable energy companies to come online around them.

Investing in Miners and the Crypto Industry With BLOK

For investors who want access to the growing crypto space with diversified exposure, the Amplify Transformational Data Sharing ETF (BLOK B-) can be a great solution.

BLOK currently has $1 billion in AUM, is actively managed, and invests in companies directly involved in developing and using blockchain technology. BLOK was also the first blockchain ETF approved by the SEC and launched in 2018.

Major blockchain miners such as Marathon, Argo, Riot Blockchain, Hive Blockchain, and more are all carried within the fund.