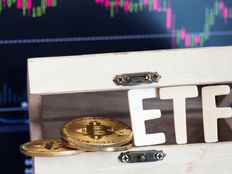 BITO broke the $1 billion in assets under management threshold in only two days, breaking the old three-day record established by the SPDR Gold Shares ETF (GLD A-) 18 years ago.

“The early success of BITO shows the attraction for investors of gaining exposure to bitcoin in their brokerage account, with the same convenience with which they can buy stocks and without the need to go through the hassle and learning curve of establishing a separate account for cryptocurrencies,” said Michael Sapir, ProShares CEO.

How One ETF Reflects a Changing Crypto Landscape

The approval by the SEC of BITO is a “huge step forward” for crypto investing, FTX CEO Sam Bankman-Fried told CNBC. He sees the bitcoin futures ETFs as a stepping off point for the cryptocurrency industry, with an increasing array of structured products being introduced going forward that pull from regulated platforms. He also anticipates the potential for legal framework to be created within the U.S. around cryptocurrencies.

“I would not be surprised to see more regulation of the markets and exchanges, especially on the anti-market manipulation,” Bankman-Fried said.

FTX is one of the of the largest crypto firms globally, and its 29-year-old CEO is estimated by Forbes to be the wealthiest person within crypto; Bankman-Fried currently has a net worth of $22.5 billion. FTX is hoping to move their cryptocurrency exchange to U.S. markets but needs to first overcome regulations and licensing issues.

BITO trades in bitcoin futures and does not invest in bitcoin itself. The fund was the first cryptocurrency and bitcoin-adjacent fund to be approved by the SEC and remains the largest. It carries an expense ratio of 0.95%.