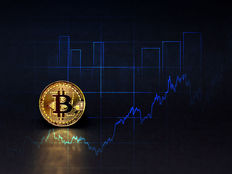 The Bold Predictions for Bitcoin Aren't Slowing Down

Bitcoin, the world’s largest cryptocurrency by market capitalization, was flirting with $57,000 late Thursday, but if one crypto backer is right, the digital asset could nearly triple from current levels.

William Quigley, a former venture capitalist and early adopter of crypto, believes Bitcoin is heading to $150,000 – perhaps as soon as later this year. Halving plays a role in his ambitious outlook.

“Bitcoin halving is when the block reward for mining new bitcoin is split in half, which means miners receive 50% less bitcoin for every transaction they verify. The event occurs every four year and most recently happened in May 2020,” reports Business Insider. “Traditionally, halving brings a long and large increase in the price of bitcoin six to 18 months after it happens, Quigley said. The current cycle has been a textbook example, Quigley said.  The price moved from $10,000 last October to $15,000 to then finish December last year close to $30,000 and has traded as high as $60,000 in March, he added.”

Supply of Bitcoin is dwindling because institutional investors are piling into the market, and many retail investors are holding onto the cryptocurrency for longer periods of time.

Bitcoin, the largest digital currency by market value, is on a torrid pace this year, prompting some investors to rue missing out on its incredible run. If a Citi report is even somewhat accurate, there’s still plenty of upside to be had with the cryptocurrency.

In a report calling Bitcoin “gold of the 21st century,” CitiBank MD, and former FX technician, Tom Fitzpatrick, revealed an uber-bullish target in which the digital asset could vault to $318,000 in just over a year.

“We have another call it seven, or eight months and I would expect that in 2021, bitcoin, if it keeps going the way it has historically, to hit $150,000,” Quigley said in the interview with Business Insider. “It could, of course, even go higher but that’s a number I would say I’m pretty comfortable with in 2021.”