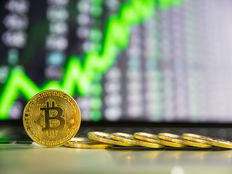 Can Bitcoin Reclaim Its Former Glory Later This Year?

With some help from The B Word Conference earlier this week, Bitcoin has rallied, and late Thursday, the largest cryptocurrency was trading over $32,200.

However, that’s well off the April highs around $63,500. What was once an asset with a market capitalization north of $1 trillion now sports a market value of around $678.5 billion. In other words, Bitcoin needs to nearly double to reclaim lost glory. Asking it to do that before the end of the year is a tall order, but at least one market observer believes it’s possible.

In a recent note to clients, deVere Group CEO Nigel Green says Bitcoin can rally through the end of 2021, supported by bullish though not sensational comments made at the B Word Conference by ARK founder Cathie Wood, Tesla CEO Elon Musk, and Square CEO Jack Dorsey.

“Musk, Dorsey and Wood are three of the most important and forward-thinking business leaders of our time.  What they say matters,” said Green. “Crucially, the tone was less sensationalist than it has been in past, with all the panelists putting across carefully considered, fact-based arguments about why they are all bullish on the future of Bitcoin and crypto generally.”

Some crypto markets are speculating that one of the primary reasons Bitcoin’s recent slide is ongoing is because institutional investors that bid the cryptocurrency higher this year aren’t yet stepping in to buy the dip.

Green says Dorsey, Musk, and Wood may have provided institutional and retail investors with the confidence they need to enter or add to crypto positions.

“Both institutional and retail investors were given a considerable crypto confidence boost by comments the panelists made about their own multinational businesses and their visions for the future,” he said.

Important to the Bitcoin outlook is that that trio of luminaries addressed the environmental implications of Bitcoin, which Musk addressed on Twitter earlier this year. The conference noted that about 70 percent of energy used to mine Bitcoin is renewable energy.

“All of this will help drive Bitcoin prices higher and this will have a knock-on effect to the wider crypto market,” said deVere’s Green. “The message from mega-influencers Elon Musk, Jack Dorsey and Cathie Wood was clear: crypto is the inevitable future.”