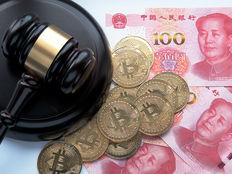 The People’s Bank of China has declared that all cryptocurrency-related transactions are illegal, the WSJ reports. Additionally, overseas crypto exchanges will be blocked from providing services in China.

A separate statement by the National Development and Reform Commission announced that China will continue shutting down crypto miners and will not permit new mining projects.

A number of other agencies, including securities and foreign exchange regulators, vowed to collaborate in efforts to crack down on cryptocurrency activity in the country.

These announcements are the latest move in the country’s crypto crackdown. In May, Chinese regulators began cracking down on bitcoin trading and mining, citing the cryptocurrency’s negative environmental impact.

This drove crypto miners out of the country, briefly dropping the global hashrate before miners were able to relocate, many of them to the United States

China’s tough stance on crypto is also spurred by fears about crypto’s decentralized nature threatening national security and social stability, as well as its potential for facilitating illegal transactions.

Although China banned crypto exchanges from operating in the country years ago, Chinese residents have been able to access cryptos in other ways.

Most recently, the SEC threatened to sue Coinbase, a large U.S.-based crypto exchange, over its plans to launch a crypto lending product, Lend. Coinbase has since scrapped its plans and announced that it will be releasing a proposal for a crypto regulatory framework, citing the importance of clear and consistent regulation for investors and the industry at large.