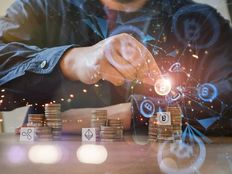 Crypto Continues to Have Diversification Benefits

Bitcoin’s correlations to equities are running high this year, prompting some investors to ponder the diversification benefits of cryptocurrency and assets such as the Valkyrie Bitcoin Strategy ETF (BTF ).

Over time, bitcoin and other digital assets do in fact have low correlations to traditional asset classes, such as stocks and bonds. However, some analysts argue that bitcoin’s penchant for volatility can be an issue regarding portfolio diversification.

“These dramatic performance swings have continued in early 2022. After dropping 16.5% in January, the CMBI Bitcoin Index partially recovered in February and March, but is still well below previous peak levels,” says Morningstar analyst Amy Arnott.

However, underscoring the potential advantages of even modest allocations to an asset such as the actively managed BTF, the long-term correlation data is on bitcoin’s side.

Interestingly, bitcoin’s correlations to gold are low, perhaps surprising investors who view the former as “digital gold.” That’s not necessarily a bad thing. At the very least, it indicates that bitcoin and gold can be deployed together in one portfolio. However, the low correlations between the two assets indicate that some bitcoin bulls may want to view cryptocurrency as more than a digital alternative to bullion.

There are some points for novice crypto investors to ponder. First, as any asset class, bitcoin included, gains more mainstream acceptance, its correlations to other assets can increase. Second, recent bouts of broader market volatility and equity slumps suggest that those conditions raise correlations across the board. That’s not bitcoin’s fault per se, but it is the current lay of the land.

“Diversification value is one potential reason to add cryptocurrency to a portfolio, but investors should also consider other factors, such as their ability to hold on through crypto’s periodic downdrafts, which have been unusually swift and severe. Crypto aficionados embracing the ‘hold on for dear life’ mindset have fared well over time, but investors who are more skittish can easily get whipsawed by extreme short-term price movements,” concludes Arnott.