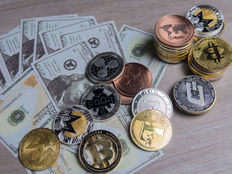 The Treasury Department has its eyes on stablecoins.

Top regulators met Monday at a President’s Working Group on Financial Markets, convened by Treasury Secretary Yellen, to discuss stablecoins, according to a press release about the meeting.

The group anticipates issuing recommendations in the coming months on stablecoins, a major type of cryptocurrency that are privately issued and linked to other, more stable assets, such as the U.S. dollar.

Many of the most widely-traded cryptocurrencies slid as a result.

Stablecoins: The Bridge Between Crypto & Fiat

Stablecoins are often considered a bridge between cryptocurrency and fiat currency. They have seen rapid growth lately, with half of all Bitcoin trades being transacted in Tether, the largest stablecoin, the Financial Times reports.

Meanwhile, USD Coin, the next-largest stablecoin, has shown growth greater than 3,400% since January.

Treasury Secretary Yellen “underscored the need to act quickly to ensure there is an appropriate U.S. regulatory framework in place” regarding stablecoins.

Discussions in the meeting included stablecoins’ rapid growth, their uses for payments, and their potential risks to the financial system, end-users, and national security.

Treasury staff also discussed a report that is being undertaken on the risks and benefits of stablecoins, the current regulatory framework in the U.S., and “recommendations for addressing any regulatory gaps,” as reported in the press release.

Participants at the meeting included Jerome Powell, Chair of the Board of Governors of the Federal Reserve, Gary Gensler, Chair of the Securities and Exchange Commission, Michael J. Hsu, Acting Comptroller of the Currency, Jelena McWilliams, Chairman of the Federal Deposit Insurance Corporation, as well as members of the Commodity Futures Trading Commission and the Department of Treasury.

The Risks of Stablecoins

The structure of stablecoins requires operators to hold large reserves in order to honor the one-to-one backing pledge of the cryptocurrency. This presents the potential for high risk should there be rapid liquidation and movement on stablecoins.

Recent disclosures from Tether, the largest stablecoin, revealed that it is now one of the world’s largest holders of commercial paper, holding some $30 billion in the short-dated investment. As a result, a move in Tether potentially could single-handedly upend and destabilize the short-term debt markets.

In the last two days Bitcoin has fallen roughly $2,000 to hit below the $30,000 threshold for the first time in 4 weeks. Other cryptocurrencies have also fallen, including ether, which fell below $1,800 for the first time since end of June.

The last time cryptocurrencies dipped so low was after China announced a crackdown on regulations that prevented crypto transactions, back in May.