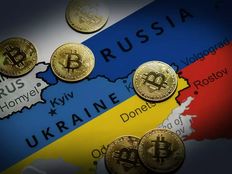 The usage case for bitcoin and other digital currencies is receiving a boost from an unfortunate situation. That being Russia’s war against neighboring Ukraine.

Still, data confirm that non-government organizations (NGOs), other groups raising funds for Ukrainians, and the government itself are raising large amounts of cash – in the hundreds of millions of dollars – with the help of bitcoin and other digital assets.

“The Russian invasion of Ukraine has led to an outpouring of direct support to the Ukrainian government from the crypto community,” notes Valkyrie head of research Josh Olszewicz. “As of March 22, nearly $100 million has been donated to crypto addresses directly associated with Ukrainian causes.”

Data from Valkyrie indicate bitcoin accounts for 34.2% of that tally. That’s not surprising when considering bitcoin is the world’s largest digital currency. Interestingly, ether, which is supported by the Ethereum blockchain, is slightly ahead of bitcoin at 37.3% of those donations. Ether is the second-largest digital coin by market value behind bitcoin.

Stablecoins, or cryptocurrencies backed by the U.S. dollar, account for 14.7% of the donations. Those include Tether, Dai, and USD Coin.

Led by Polkadot at 9.5%, some decentralized finance (defi) tokens are among the digital currencies donors use to provide Ukraine monetary assistance. Others include dogecoin, polygon, and Solana.

“Crypto exchanges Kraken and Binance have also pledged $10 million in donations to Ukrainian causes with FTX and Everstake partnering with Ukraine’s Ministry of Digital Transformation on a crypto fundraising website,” adds Olszewicz.

WGMI holds a basket of environmentally friendly bitcoin miners while the actively managed VBB holds stakes in companies that hold bitcoin on their balance sheets or have some involvement in the crypto ecosystem. Holdings in that ETF include MicroStrategy, Square, and Tesla, among others.