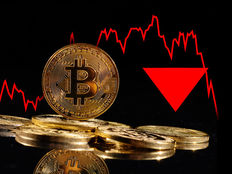 Bitcoin fell around 10% early Monday morning, hitting its lowest price in over a month. Ether also saw a dip of about 8%. Other cryptos were also down, and the crypto market lost around $250 billion in value.

The stocks of companies closely linked to the crypto market and sometimes used by investors as crypto proxy investments also traded lower on Monday.

MicroStrategy, the business intelligence software company that has made Bitcoin acquisition its second mandate, saw a drop of over 4% on Monday. Square Inc. fell by 2%.

Coinbase dropped 3.5%, its price dive likely impacted by its announcement late last Friday that it was dropping its planned crypto lending business after the SEC threatened to sue.

The sell-off is largely due to investor concern about the potential fallout from massive Chinese development company Evergrande. Evergrande currently has over $300 billion in debt and has recently told investors that it may default on that debt, which could impact not only China’s economy but foreign financial centers as well.

It is likely that the Chinese government will work to contain the issue, however when and what that will look like is still unclear.

Investors are also worried about the Federal Reserve removing monetary stimulus, which it may do after its two-day meeting this week.