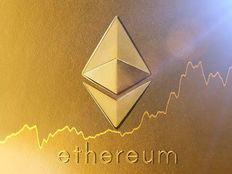 As of late Friday, ethereum sported a market capitalization north of $307.1 billion. While that’s less than half of bitcoin’s market value, ethereum is still an impressive number two in the crypotcurrency space.

Putting its market value into context, ethereum is more than triple the size of tether — the third-largest digital currency — and about $57 billion bigger than Coca-Cola (NYSE:KO). Investors looking to engage ethereum in fund form might want to consider the Grayscale Ethereum Trust (ETHE).

ETHE, which has $7.8 billion in assets under management, benchmarks to the CoinDesk Ether Price Index. For investors who can afford the minimum investment of $25,000, ETHE could be a compelling long-term investment because some crypto experts see ethereum prices soaring in exponential fashion.

In a recent interview with CNBC, Abra CEO Bill Barhydt said that as ether’s usage case expands, the price could swell to $40,000. Compare that with its price of $2,561 as of late March 11.

“Ethereum network effects are based on this idea that it could become the world’s computer,” said Barhydt. “It’s being used for stable coins, NFTs, defi. With staking coming, the rates are probably going to increase to 10-ish percent, which is going to show massive influx of people trying to hold ethereum.”

Experts have long hailed the networks of cryptocurrencies, namely bitcoin and ethereum, saying that those effects could eventually rival those of social media companies. Those observers also point out that ethereum’s network effect is robust.

“Another network effect of Ethereum is the developer tools and audience for projects. When decentralized applications are made, there are is lot of technical knowledge needed and work to be done. Ethereum has the most mature developer tool suite, and the largest amount of knowledgeable developers. It also provides a large audience for projects (such as NFTs or games), making it attractive to use for startups,” according to a Cornell University study.

Enhancing the case for ETHE, Barhydt says that ethereum’s usage case is expanding, and as gas fees and transaction fees come down, that could reduce impediments to network effects.

“It’s deflationary, the use cases are through the roof,” says Barhydt. “All the stars are lining up for ethereum, in my opinion, right now.”