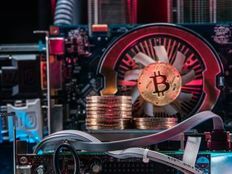 Like any other industry, bitcoin mining isn’t free of risk or potential controversy. In fact, despite its relative youth, the bitcoin mining industry has already encountered controversy at the hands of critics pointing out that the industry isn’t environmentally friendly.

At a time when corporations and investors — both professional and retail — are increasingly interested in crypto and scrutinizing the environmental, social, and governance (ESG) factors attached to various asset classes, bitcoin miners need to up their sustainability games.

Some are doing just that, and increasing environmental transparency from the industry could be supportive for exchange traded funds such as the VanEck Digital Assets Mining ETF (DAM ).

“Environmental impacts stemming from the big business of bitcoin mining are getting a dose of transparency that’s welcome to the world’s largest asset manager,” reported Ben Strack for Blockworks. “Energy Web, which focuses on mechanisms to decarbonize the global economy, is set to publish ‘sustainability scores’ for miners in the coming months — an effort highlighted by BlackRock.”

BlackRock recently announced a crypto partnership with Coinbase (NASDAQ:COIN) whereby institutional clients gain access to the Aladdin platform. That indicates that the world’s largest asset manager sees some merit in cryptocurrency as an investable asset class.

Specific to DAM, those headlines are relevant not only because Coinbase is the ETF’s fifth-largest holding at a weight of 5.60%, but also because BlackRock is one of the most noted, vocal supporters of ESG in the investment community. Investors’ interest in ESG is rising, indicating that DAM member firms need to pay attention to that trend.

“Interest in ESG investments — made with environmental, social and governance issues in mind — have grown in recent years within traditional finance,” according to Blockworks. “England-based financial services company Hargreaves Lansdown reported Monday that its clients holding ESG ETFs had grown nearly 708% between January 2017 to June 2022  —  from 0.13% to 1.05%.”

Some DAM components are heeding the call. That group includes Marathon Digital Holdings (NASDAQ:MARA), which is DAM’s largest holding at a weight of 8.55%.

“Marathon Digital, for example, said in April it was moving bitcoin miners from its facility in Montana to new locations with more sustainable sources of power. The company expects its mining operations to be carbon neutral by the end of this year,” added Blockworks.

For investors, there are other tangible benefits in DAM components elevating sustainability profiles. Namely, broader use of renewable energy can lead to lower costs, in turn boosting profitability.