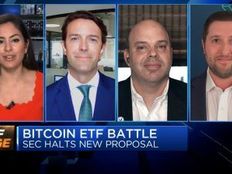 Todd Rosenbluth, head of research at VettaFi, Will Rhind of GraniteShares, and Michael Sonnenshein, CEO of Grayscale Investments, joined Seema Mody to discuss commodities, the strength of the U.S. dollar, and the recent denial of Grayscale’s spot bitcoin ETF conversion by the SEC.

The discussion opens by talking about the growing popularity of dividend strategies and short-duration bond funds. Rhind then moves on to talk about the softening of commodity prices in the last few weeks, particularly when looking back at commodity performance in the majority of the first half of 2022.

Rosenbluth then touches on some of the highlights for commodities this year, as well as precious metals such as gold. Advisors are showing preference for broad allocation to the space, as evidenced by a VettaFi advisor poll on a recent webcast. Funds such as the Invesco Optimum Yield Diversified Commodity Strategy No K-1 ETF (PDBC ) offer this type of broad exposure through investment not just in precious metals but also agriculture, energy and more.

Will Rhind went on to discuss the connection between gold and the U.S. dollar, explaining that because of gold’s negative price correlation to the strength of the dollar, it is down in the U.S. but in other markets with weak currencies, gold is at an all time high. Rhind anticipates that as rates level out and things stabilize in the U.S., the strength of the dollar will start to fall again, leaving gold positively positioned.

GBTC’s Conversion Denial by the SEC

Michael Sonnenshein, CEO of Grayscale Investments, discussed the denial of their conversion of the Grayscale Bitcoin Trust (GBTC) to an ETF by the SEC recently, and their litigation response.

GBTC is currently the largest bitcoin investment vehicle in markets, and its conversion would provide both greater levels of investor protections as well as providing what Sonnenshein described as “billions of dollars of unrealized shareholder value.”

Grayscale’s response to the denial has been to turn around and sue the SEC, filing with the U.S. Court of Appeals for the District of Columbia to review the decision. The SEC requires that exchanges filing for the spot bitcoin ETFs either agree to be surveilled or else can prove that the underlying markets are resistant to fraud and manipulation.

“The inconsistent treatment here by the SEC allowing the futures products to trade but denying the spot products to trade is not looking at what is essentially the same exact market through a like lens here,” Sonnenshein said. “In fact, the treatment is quite disparate.”

Rosenbluth believes that the SEC will need to feel more assured that there isn’t manipulation and fraud occurring in the underlying markets before approving a spot bitcoin ETF, something that hasn’t been proven to their satisfaction as of yet. While the futures based bitcoin ETFs such as the ProShares Bitcoin Strategy ETF (BITO ) offers the added investor protections of funneling through the Commodity Futures Trading Commission’s regulations, a spot bitcoin ETF would lack this added oversight and protection.

“They’ve made a distinction between a futures based product and regulations that are tied to it, and a spot based, and I think it’s hard to be able to overcome those challenges,” Rosenbluth said.