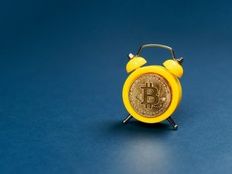 Experts Says Bitcoin Rebound Only a Matter of Time

Bitcoin’s decline and those of crypto-correlated equities, including miners, are proving dramatic. In the case of the largest digital currency, it needs to roughly triple current levels to return to its all-time high.

Given the current state of affairs in the crypto market, which is highly dour, it’s difficult to forecast exactly when digital assets will bounce back. Still, there’s plenty of optimism that bitcoin is simply in the midst of a bear market, not on the brink of extinction.

Should that optimism prove warranted, it could benefit exchange traded funds such as the Fidelity Crytpo Industry and Digital Payments ETF (FDIG ). As its name implies, FDIG is an equity-based fund, not a dedicated bitcoin ETF. However, the Fidelity ETF’s components certainly check the box as crypto-correlated stocks.

Translation: A legitimate bitcoin rally would likely matriculate down to FDIG, propelling the fund higher. Some experts are optimistic, even drawing comparisons between bitcoin today and the tech bubble of 2000.

Rockefeller International managing director and chairman Ruchir Sharma “said bitcoin could make a comeback in similar fashion to that of e-commerce giant Amazon (AMZN), which plunged about 90% in the early-2000s dot-com collapse, but subsequently rose more than 300 times in value over the next 20-plus years,” reported Fran Velasquez for CoinDesk.

Sharma acknowledges that the next several months could bring more turbulence for bitcoin and the broader universe of digital assets, but that could also serve to shake weak hands from the market. Some argue that’s already happening.

The benefit in such a scenario, particularly in the case of an ETF such as FDIG, is that it can separate the legitimate crypto companies from those with dubious prospects of survival. While FDIG components are struggling today, the bulk of the ETF’s lineup is arguably strong from the perspectives of fundamentals and long-term outlooks.

Sharma “returned to the Amazon example, noting it took some time for that company to recover. Indeed, it was several years until the stock of the online retailer caught up to and surpassed its bubbly 1999 level,” according to CoinDesk.

History is littered with “next Amazons” that didn’t come anywhere close to that status, but FDIG could have some viable contenders in its ranks, including Block (NYSE:SQ), Coinbase (NASDAQ:COIN), and Shopify (NASDAQ:SHOP).