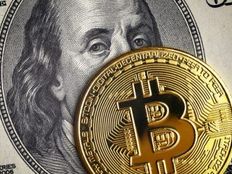 In financial market terms, bitcoin isn’t an old asset, but its history is still widely studied. One of the primary observations regarding the largest digital currency is that in its early years, it wasn’t intimately correlated to equities.

There were even periods when bitcoin was negatively correlated to stocks. However, that scenario changed in recent years, leaving bitcoin branded as a risk asset in the process. As a result, it’s not surprising that in a time when stocks are struggling, as is the case in 2022, the same is true of bitcoin.

“First and most obvious, asset classes show increased correlation during times of market volatility and uncertainty. Even the bond market, which usually exhibits a negative correlation with equities, has been showing an increasing positive correlation throughout 2022. On the other hand, some of the correlation could be attributed to cryptocurrency market maturity,” noted Alerian analyst Roxanna Islam.

Indeed, bitcoin’s rising correlations to stocks are leaving some investors disappointed, particularly in this high inflation environment. Previously, some experts believed that bitcoin would be an ideal inflation-fighting tool. However, it’s possible that the digital asset’s correlations will decouple going forward.

“With limited data and no set precedent, it is difficult to tell how Bitcoin correlations will look like in the future. It is likely that correlations could decouple slightly as markets normalize, but correlations may still remain high given market maturity,” added Islam. “But higher correlation with equities isn’t necessarily bad, especially since many investors have started to use Bitcoin and Bitcoin-related equities as a return enhancer or as a portion of a larger tech allocation at levels around 1-5% of their total portfolio.”

Speaking of correlations, investors can find equities — so-called crypto-correlated stocks — that are highly sensitive to bitcoin’s price movements. Those include bitcoin miners, firms that are larger holders of bitcoin and other fintech names with crypto inroads.

“Crypto miners also share high correlations with Bitcoin as they derive most of their profits based on the price of Bitcoin mined but can vary based on how well they manage electricity costs and overhead expenses. Correlations for exchanges and banks are still relatively high but lower than other parts of the crypto ecosystem as their profits are also derived from volumes, fees, and commissions,” concluded Islam.

vettafi.com is owned by VettaFi, which also owns the index provider for SATO & BLKC. VettaFi is not the sponsor of SATO & BLKC, but VettaFi’s affiliate receives an index licensing fee from the ETF sponsor.