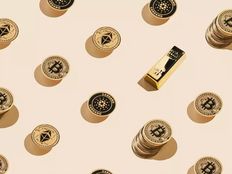 Devoted crypto experts and investors believe that higher prices and increased validation for digital assets can be built through more everyday usage cases for bitcoin and the like.

For example, the easier it is for consumers to buy normal goods and services with digital assets, the more viable the investment thesis is for bitcoin and friends. Good news: Gucci is joining the list of companies that will accept bitcoin and other cryptocurrencies as payment.

Last week, the famed Italian fashion house, which is owned by France’s Kering, said that it’s debuting a crypto payment service later this month at flagship stores in Los Angeles and New York, among others.

Gucci’s embrace of crypto assets could have positive, long-term implications for index funds including the Grayscale Bitcoin Trust (GBTC) and the Grayscale Ethereum Trust (ETHE).

“Italian luxury brand Gucci will start accepting payments in cryptocurrencies in some of its stores in America,” reports the BBC. “Customers will be able to pay using a number of cryptocurrencies, including Bitcoin, Ethereum and Litecoin.”

The Gucci announcement, which will eventually impact all of its North American stores that it operates itself, is another example of the expanding utility of digital wallets as well.

Gucci “customers paying in stores with cryptocurrencies will be sent an email with a QR code to use with a digital asset wallet – a financial transaction app that runs on mobile devices,” according to the BBC.

Gucci joins the likes of AT&T (NYSE:T), Microsoft (NASDAQ:MSFT), and Starbucks (NASDAQ:SBUX) in accepting crypto as a form of payment. At more than 100 years old, Gucci is also one of the oldest companies to embrace bitcoin and other digital assets in this way.

“Gucci is always looking to embrace new technologies when they can provide an enhanced experience for our customers,” said Marco Bizzarri, Gucci president and CEO, in a statement. “Now that we are able to integrate cryptocurrencies within our payment system, it is a natural evolution for those customers who would like to have this option available to them.”

Gucci is also establishing a footprint in the non-fungible token (NFT) space.

“Most recently, it shared via its Gucci Vault Discord server that owners of two of its NFT projects — SuperGucci and Gucci Grail — would have special access to pre-order a Gucci collection before it is released to the general public. It’s a move that clearly ties NFT collections and Gucci’s budding Web3 community to real-world consumption — a significant move for a luxury brand,” according to Vogue Business.