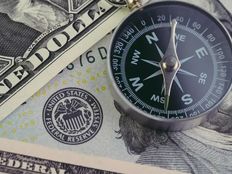 The Federal Reserve boosted interest rates by 0.25% on Wednesday, marking the start of a tightening cycle that could include as many as six rate hikes this year.

How a tightening regime of that magnitude impacts various asset classes remains to be seen, but at least one noted investors sees upside for bitcoin between now and the next meeting of the Federal Open Market Committee (FOMC), which is slated for May. That could be good news for assets such as the Grayscale Bitcoin Trust (GBTC).

“Since bitcoin is currently trading at the low end of its range, $41,230 as of Wednesday, he would choose the digital token over the bullion, which trades slightly above $1,900, the high end of its range,” reports Yun Li for CNBC.

Time will tell if bitcoin will rally into the next Fed meeting. The largest cryptocurrency is often referred to as “digital gold.” While critics take issue with that comparison, bitcoin bulls probably don’t want to see the asset and GBTC perform like gold following a rate hike because the yellow metal has a history of languishing against the backdrop of higher interest rates.

The reason for that is simple. Higher rates can make it more compelling to own lower-risk bonds because gold and gold funds don’t pay interest or dividends. The same goes for bitcoin and GBTC. However, this tightening cycle could be different because the Fed is boosting rates while inflation is high and high inflation is typically a boon for gold.

Bitcoin traded just under $41,000 following the Fed news on Wednesday, and it’s off just over 2% over the past week.

“Gundlach said stocks are having a relief rally after the Fed’s move partly because equities are in extreme oversold condition. The investor warned that the market could roll over once the Fed raises rates a few more times,” according to CNBC.

That could enhance the allure of gold and perhaps bitcoin, too.