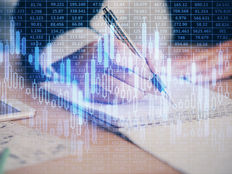 That could prove to be good timing for the Grayscale ETF because bitcoin, the largest digital currency by market value, is up more than 14% over the past week. Should that bullishness continue, it could spark rebounds by crypto-correlated stocks, including GFOF holdings.

Some good news is already emerging as some GFOF member firms, including crypto miners, showed signs of strength on Monday.

“Also faring well are Bitcoin miners—companies that run vast troves of computers in a race to process blocks of Bitcoin transactions, earning fees and rewards in Bitcoin if they succeed in validating blocks,” reports Daren Fonda for Barron’s. “Large U.S.-based miners include Marathon Digital Holdings (MARA), Riot Blockchain (RIOT), and Core Scientific (CORZ). All were up 8% to 10% on Monday.”

Riot Blockchain and Marathon Digital combine for about 7.5% of GFOF’s roster, according to Grayscale data. While crypto miners were punished amid a sell-off in bitcoin and other digital assets that started in the fourth quarter and seeped into January, some analysts say that bitcoin prices would need to sink to nearly unthinkable levels before profitability is endangered for these firms.

“Miners can still be quite profitable with Bitcoin in the $40,000 range, however. Marathon, for instance, should have a cost per Bitcoin mined of $6,300, estimates D.A. Davidson analyst Christopher Brendler. Riot should have a cost per coin at $12,500 this year, he estimates, and Core will be around $5,000,” according to Barron’s.

In other words, GFOF’s crypto miners components are somewhat similar to traditional gold miners or oil exploration and production companies in that if they’re well-managed firms, they can generate profits even when prices of the underlying commodity (or digital asset) decline. Plus, some bitcoin miners are attractive on valuation today.

“One reason the stocks look inexpensive is that the companies are accumulating Bitcoin on their balance sheets—building a digital-asset base. Brendler calls Marathon his top pick, partly because the company should have nearly $2 billion in Bitcoin on its balance sheet by the end of 2023, assuming a price per coin of $42,000,” notes Barron’s.

To be sure, GFOF offers more than exposure to bitcoin miners. The rookie ETF, which tracks the Bloomberg Grayscale Future of Finance Index, provides exposure to exchange operators and payment platforms, among others, in addition to miners. Other top holdings in the fund include Coinbase (NASDAQ:COIN) and Block (NYSE:SQ).